December 12, 2022 (Investorideas.com Newswire) With the need for counterdrone technologies rising, Australian and U.S.-based DroneShield Ltd. has released a lot of news. Read more to learn about the company's myriad of orders, the DOD recommendation, and the recent million-dollar placement. 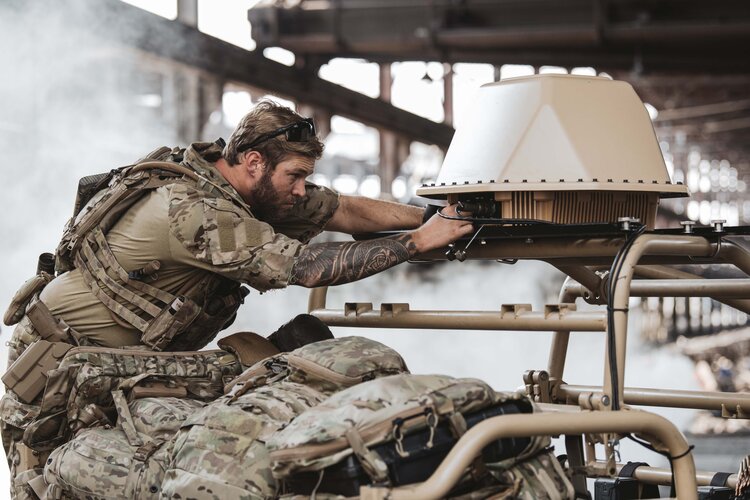 Australian and U.S.-based tech company DroneShield Ltd. (DRO:ASX; DRSHF:OTC) has been making many moves lately. Along with an influx of orders over the past two months, the company has also secured a recommendation from the Depart of Defense (DOD) and a AU$3.7 million placement.

DroneShield offers what is known as counterdrone systems, which can interfere with or disable remote-controlled ground surveillance drones during operation and while in flight.

Due to the practical application of drones in modern warfare, the counterdrone technology marketed by DroneShield has attracted the attention of major military electronic warfare organizations, such as the ISREW branch of the Australian Joint Systems Division, The United States Department of Defense, and the Department of Homeland Security.

Why Is Counterdrone Technology Taking Off?

While drones can be extremely useful, they can also pose serious threats. They can be used for drug smuggling, interfere with planes if they are used in airspace near airports, or uncover secure data that should not be released. Because of this, it is imperative we have the technology to counter them by jamming their signal or taking them down completely, and this has become more important now than ever.

As the U.S. Government Accountability Office says, "With over 2 million drones projected in the U.S. by 2024, these risks are likely to grow." 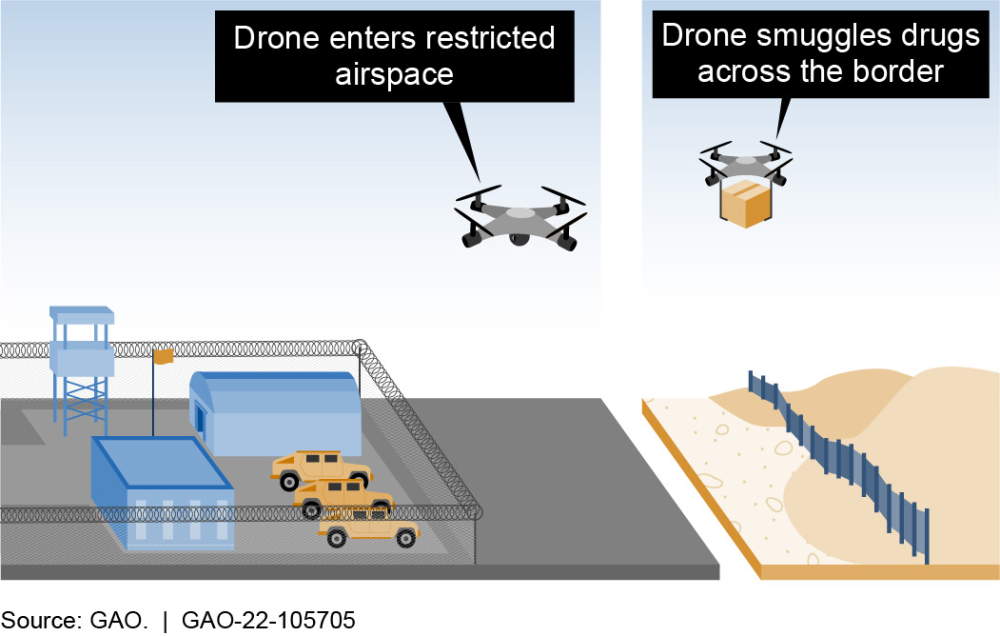 Figure 2. In this example, a critical site detects an unauthorized UAS nearby. An interference signal jams the connection between the UAS and its operator to reroute the UAS away from the site.

National Defense Business and Technology Magazine reported that Meni Deutsch, the regional director for Europe at Skylock Anti-Drone Technologies, said, "We have been witnessing the growing demand for anti-drone systems and technologies."

This demand has led to massive projected growth. The counterdrone market was already at "US$1.1 billion in 2021 and is anticipated to register a CAGR [compound annual growth rate] of 28.3% from 2022 to 2030," which could provide ample opportunity to investors. 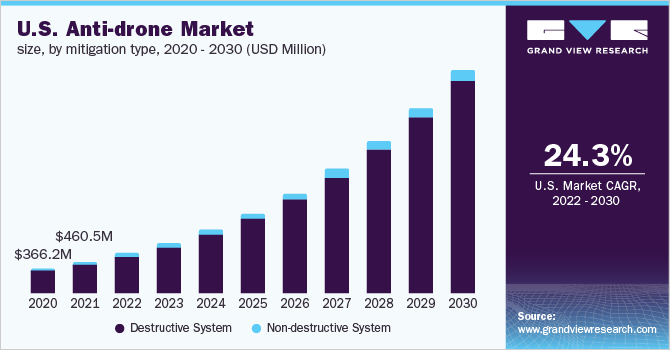 As for DroneShield, the company "differentiates itself from the rest of the market by offering an end-to-end counterdrone solution with largely in-house technology," Daniel Laing of Bell Potter Securities wrote in a September report.

A Plethora of Orders

Airports have been on the watch for technology to counter drones. That need was amplified after several incidents, one being the 2018 Gatwick affair, where one of the U.K.'s most popular airports had to suspend all travel after multiple drones were sighted along its airfield.

Since then, "stakeholders at airports all over the world have called for a solution that can identify unauthorized drones - while complying with laws that generally prohibit interference with aircraft," reported DroneLife.

This led to DroneShield's August 2022 announcement of its first permanent deployment of DroneSentry at a U.S. airport. You can see a video demonstration of how the Sentry works here.

Then on October 25, 2022, the company received a AU$900,000 order contract for portable counterdrone systems for an undisclosed Asian country. This led to the company trading 2.56% higher on the announcement day.

Last month, DroneShield also announced it would receive AU$1 million from an unnamed international government agency. In this order, the company would provide several of its DroneSentry-X units. DroneSentry-X is vehicle compatible counterdrone device. You can read more details about it here and see a video demonstration of the product through this link.

Payment and shipment are expected before the end of the quarter. The company reported that "for this customer, it is an initial purchase that follows trials, and is expected to follow up with a number of additional systems, to be acquired in 2023."

As the need for countdown technology intensifies, the department of defense has decided to spend at least US$668 million on counterdrone research and development and at least US$78 million on the acquisition by the 2023 fiscal year.

Along with this, the DroneShield happily unveiled it had been recommended by the U.S. DoD's Joint Counter-small Unmanned Aircraft Systems Office (JCO) as part of the Science Applications International Corporation (SAIC) joint solution for Counter-UAS as a Service (CaaS).

CEO and managing director Oleg Vornik told Streetwise Reports that DroneShield is proud to have this recommendation and that they "look forward to installations next year as now [the] recommendation has been made to implement the rollout of counter drone systems across the U.S."

Laing of Bell Potter identified "the deployment of its technology at U.S. military bases following the U.S. DOD recommendation" as a key catalyst for DroneShield's projected growth."

These inroads maintained with major government organizations have established the "validation of the sales pipeline through consistent contract wins," which Laing claims to be an additional, concurrent catalyst for DroneShield's sustained growth in other sectors.

Epirus Inc., named after the unending arrows of the Greek hero Theseus, is a technology company that creates software-defined directed energy systems, which are used to counter electronics from various ranges.

Vornik spoke with Streetwise Reports about the deal, saying that DroneShield and Epirus have been working together for a while now. This is due to their complementary technologies, as DroneShield focuses on drone detection while Eprius focused on defeating drones through high-powered microwave weapons systems.

According to Peloton Capital, the market volume saturation resulting from this deal "represents a discount of 2.4% to the last closing price of AU$0.21 per share."

At around AU$0.20 per share, Epirus's placement has provided DroneShield an additional AU$3.7 million in operating capital. Peloton reports that this deal grants Epirus a 4.1% shareholder stake in the upstart Australian counterdrone company.

Shane Gavegan of Peloton Capital noted that DroneShield plans to direct this incoming investment capital toward "the scaling up of ready inventory and long lead items to rapidly fulfill anticipated orders."

DroneShield is covered by a surfeit of analysts, including Finola Burke of RaaS Advisory Pty Ltd., and previously mentioned Daniel Laing of Bell Potter Securities Ltd., and Shane Gavegan of Peloton Capital.

Laing suggested an estimated "AU$50 million worth of projects for 2022 and about AU$180 million worth for next year and further out" to be fulfilled by DroneShield - a matter of bolstering its supply to meet steady demand. The company, according to Laing, is well positioned to "capitalize on favorable macroeconomic conditions accelerating structural growth in the market." 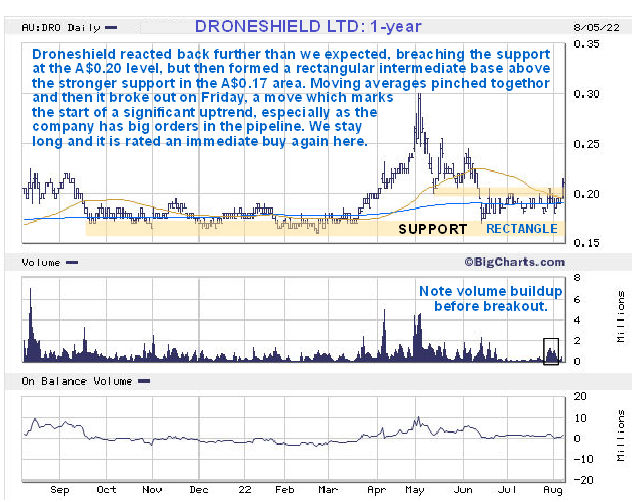 There is also evidence to suggest that this demand for DroneShield's military technology will grow considerably in the coming quarters, where Gavegan projects that the funding received from Epirus will contribute toward "the scaling up of engineering and operations in support of current momentum."

This momentum is echoed in the words of Peloton analyst Darren Odell, who noted that the counterdrone company is "currently selling its systems in the Five Eyes countries, the Middle East, and Ukraine."

Technical analysts Clive Maund also commented on the stock in an August 9, 2022, post.

There Maund said, "the fundamentals of the company have continued to improve at an ever more rapid rate."

He rated the company an Immediate Buy and said, "with the outlook for orders and earnings improving dramatically, it is clear that there is everything to go for here."

Both Peloton and Bell Potter also maintain their Buy recommendations on DroneShield.

Click "See More Live Data" in the data box above to view more of what they are saying.

Approximately 11% of DroneShield's stock is owned by management, with CEO Oleg Vornik claiming 15.3 million shares at a majority stake of 3.39%. Other internal stakes are maintained by CFO Carla Balanco at 3.2 million shares, as well as board member Peter James with 9.3 million.

Without any institutional shareholders, the remaining 89% of DroneShield's outstanding shares are retail.

By the end of the September quarter, the company had a cash balance of AU$7.5 million, along with the AU$3.7 million from Epirus. They ended the quarter slightly cash flow positive and expect to either break even or be cash flow positive this quarter.

1) Katherine DeGilio and Tom Griffin wrote this article for Streetwise Reports LLC and Tom Griffin provides services to Streetwise Reports as an independent contractor. They members of their household own securities of the following companies mentioned in the article: None. They or members of their household are paid by the following companies mentioned in this article: None.

5) From time to time, Streetwise Reports LLC and its directors, officers, employees or members of their families, as well as persons interviewed for articles and interviews on the site, may have a long or short position in securities mentioned. Directors, officers, employees or members of their immediate families are prohibited from making purchases and/or sales of those securities in the open market or otherwise from the time of the decision to publish an article until three business days after the publication of the article. The foregoing prohibition does not apply to articles that in substance only restate previously published company releases. As of the date of this article, officers and/or employees of Streetwise Reports LLC (including members of their household) own securities of DroneShield Ltd., a company mentioned in this article.