Saving Us From Us

To this scribbler and question asker net zero carbon emissions costing $15T to accomplish seems like a radical environmental vision and a steep price for us to pay for it.

The Quaternary Period encompasses the most recent 2.6 million years of Earth's existence and it has had dozens of glacial advance/retreats over its lifetime.

"...since the 1950s the marine record has become more useful because of its greater continuity and preservation. Marine cores may contain microscopic fossils of single-celled organisms called foraminifera, whose shells contain a record of water temperature and composition as stable isotopes of oxygen and carbon. These isotopes have revealed that dozens of major glacial-interglacial episodes have taken place during the Quaternary." Quaternary, Encyclopedia Britannica

Glacials refer to the colder phases within an ice age while interglacials are the warmer periods between cold spells.

The end of the last glacial period was about 12,000 years ago.

"At the start of the Quaternary, the continents were just about where they are today, slowing inching here and there as the forces of plate tectonics push and tug them about. But throughout the period, the planet has wobbled on its path around the sun. The slight shifts cause ice ages to come and go. By 800,000 years ago, a cyclical pattern had emerged: Ice ages last about 100,000 years followed by warmer interglacials of 10,000 to 15,000 years each. The last ice age ended about 10,000 years ago. Sea levels rose rapidly, and the continents achieved their present-day outline.

When the temperatures drop, ice sheets spread from the Poles and cover much of North America and Europe, parts of Asia and South America, and all of Antarctica. With so much water locked up as ice, sea levels fall. Land bridges form between the continents like the currently submerged connector across the Bering Strait between Asia and North America. The land bridges allow animals and humans to migrate from one landmass to another.

During warm spells, the ice retreats and exposes reshaped mountains striped with new rivers draining to giant basins like today's Great Lakes. Plants and animals that sought warmth and comfort toward the Equator return to the higher latitudes. In fact, each shift alters global winds and ocean currents that in turn alter patterns of precipitation and aridity around the world." Quaternary Period, National Geographic 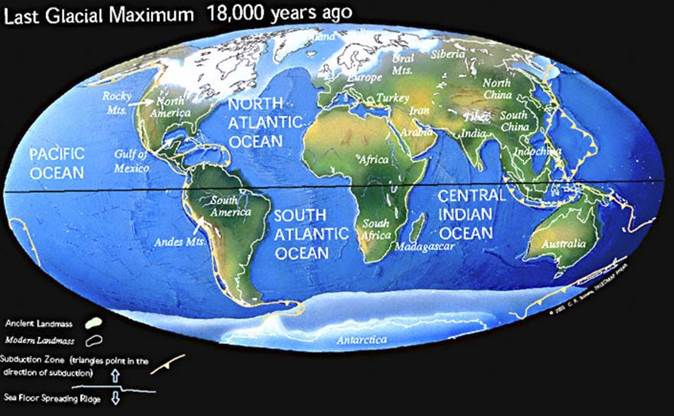 At one point during the Ice Age, sheets of ice covered all of Antarctica, large parts of Europe, North America, and South America, and small areas in Asia.

At the height of the most recent glaciation, some 18,000 years ago, the ice sheets were more than 12,000 feet thick. Sea levels plunged more than 400 feet and global temperatures dropped an average of 10 degrees Fahrenheit (up to 40 degrees in some areas).

By 15,000 years ago modern humans had reached the Americas. 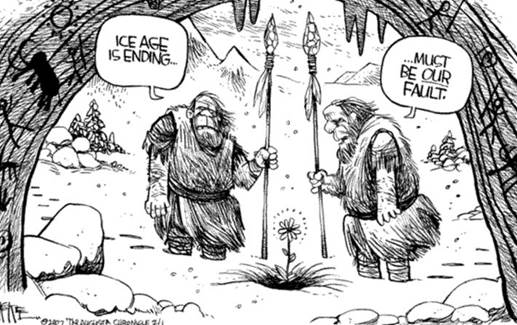 Just twelve thousand years ago, the ice sheets started to retreat at the beginning of the current interglacial - the Flandrian.

Compared to the last interglacial, the Eemian (130,000 to 114,000 years ago), the Flandrian has been slightly colder and sea levels are currently at least 3 meters lower.

Between 12,800 to 11,500 years ago, during the Younger Dryas (YD) mini ice age (one of the most well known examples of abrupt climate change), present day Great Britain froze solid within a year and a lot of the northern hemisphere, on both sides of the North Atlantic, fell into perpetual winter.

Almost as remarkable as the quick start of the YD was the speed of its demise. 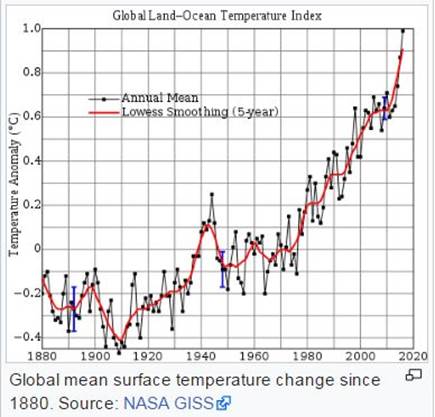 It is estimated from Greenland ice-cores, which display annual banding, that the annual-mean temperature increased by as much as 10°C in 10 years.

"Humanity's experiment with planetary warming has reached a new level of extremes. Last month was the hottest February in 137 years of record keeping, according to data released Thursday by the National Oceanic and Atmospheric Administration. It's the 10th consecutive month to set a new record, and it puts 2016 on course to set a third straight annual record."Tom Randell, Bloomberg ‘Stunning Global Heat Wave Pushes Planet Into Uncharted Territory'

All these hottest year "records" are based on temperature data that have only have differed by just a few hundreths of a degree to tenths of a degree Fahrenheit.

Just as the weather has changed over time, so too has the reporting - media outlets blow hotter or colder following the short-term changes in temperature.

It's easy to follow mainstream media's climate change coverage dating back to the late 1800s with several major publications, including The New York Times, Time magazine and Newsweek reporting on four different climate shifts since 1895.

In 1895 the page six headline of The New York Times warned about the looming dangers of a new ice age. Reporting on ice age threats lasted from the late 1800s well into the late 1920s.

After the earth's surface warmed less than half a degree, remember we are in an interglacial, newspapers and magazines responded with sensational stories about the new threat with the Times out in front, cautioning "the earth is steadily growing warmer." 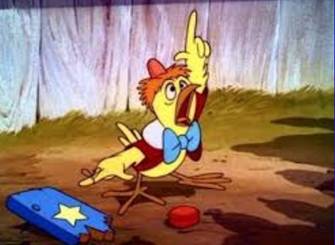 British amateur meteorologist G. S. Callendar was arguing that mankind was responsible for heating up the planet with carbon dioxide emissions as early as 1938.

In 1954, Fortune magazine was writing about another cooling trend and ran an article titled "Climate - the Heat May Be Off."

Stories about global cooling started in the ‘50s but didn't gain much traction until about 1975. Some of the stories were remarkably similar in subject to today's - severe weather and deadly storms would occur much more frequently, climate changes pose a major threat to the food supply.

In 1975, The New York Times reported: "A Major Cooling Widely Considered to Be Inevitable."

"The Cooling Worlds" was the title of a Newsweek article in 1975. The paper wrote;

"the Earth's weather patterns have begun to change.....a drop of half a degree in average ground temperatures in the Northern Hemisphere between 1945 and 1968. The evidence in support of these predictions has now begun to accumulate so massively that meteorologists are hard-pressed to keep up with it....what causes the onset of major and minor ice ages remains a mystery not only are the basic scientific questions largely unanswered, but in many cases we do not yet know enough to pose the key questions" 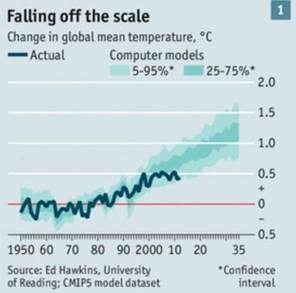 The global warming hiatus in which the rise in Earth's average temperature slowed during the late 1990s early 2000's is written off as a minor and temporary abnormality. 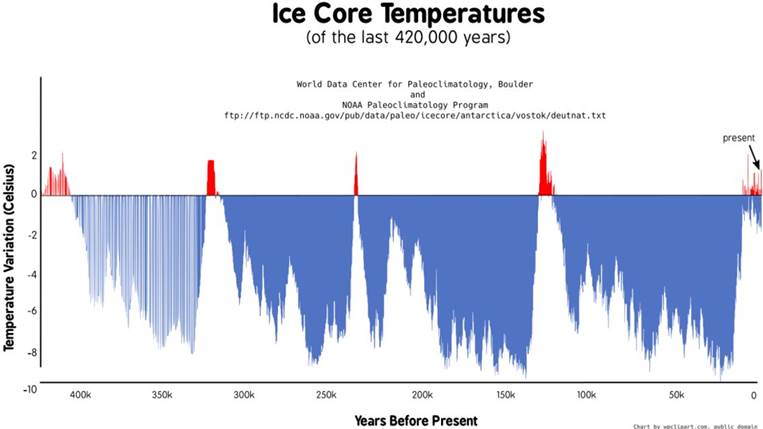 "The global warming experienced during the past century pales into insignificance when compared to the magnitude of at least ten sudden, profound climate reversals over the past 15,000 years. In addition, small temperature changes of up to a degree or so, similar to those observed in the 20th century record, occur persistently throughout the ancient climate record.

Temperature changes over the past 15,000 years.

The magnitude and timing of past climatic changes are recorded in the isotope data from Greenland and Antarctic ice cores. These data clearly show that abrupt climate changes many times greater than those of the past century have occurred many times in the geologic past.

Numbers correspond to the temperature curves on above chart.

"Convulsions and revolutions violent beyond our experience or conception, yet unequal to the destruction of the globe, or the whole of the human species, have both existed and will again exist [terminating] an astonishing succession of ages." George Hoggart Toulmin in his 1785 book, The Eternity of the World

"Historically, the claim of consensus has been the first refuge of scoundrels; it is a way to avoid debate by claiming that the matter is already settled. Whenever you hear the consensus of scientists agrees on something or other, reach for your wallet, because you're being had. Let's be clear: the work of science has nothing whatever to do with consensus. Consensus is the business of politics." Michael Crichton, 17th January 2003, speaking at the California Institute of Technology

A consensus of the world's leading scientists back in Galileo's time thought the Sun revolved around the Earth. Consensus does not equal scientific fact - is the Earth flat?

When someone says "the science behind climate change is settled" just remember real science is never settled.

Water vapor, methane and CO2 are not causes of global warming, they are symptoms or feedbacks - warming starts before gas levels increase.

Methane, as a greenhouse gas, is 30 times worse than CO2. Water vapor, so far the largest contributor to warming (because there is so much of it from the world's oceans), amplifies the effect of other greenhouse gases by twofold. Yet with most methane frozen in arctic tundra or at the bottom of the world's oceans it was just as impossible to ‘criminalize' methane as it would have been to ‘criminalize' water vapor from the Earth's oceans. How could you say you can stop the Arctic from melting or the ocean's from warming? So CO2, a gas much easier to banditize was made the culprit. No matter its just .04% of our atmosphere, absolutely essential to life on this planet and that plants and animals do exceedingly well with much higher levels.

AOTH/Richard Mills has based this document on information obtained from sources he believes to be reliable, but which has not been independently verified.

AOTH/Richard Mills makes no guarantee, representation or warranty and accepts no responsibility or liability as to its accuracy or completeness.

Expressions of opinion are those of AOTH/Richard Mills only and are subject to change without notice.

AOTH/Richard Mills assumes no warranty, liability or guarantee for the current relevance, correctness or completeness of any information provided within this Report and will not be held liable for the consequence of reliance upon any opinion or statement contained herein or any omission.

Furthermore, AOTH/Richard Mills assumes no liability for any direct or indirect loss or damage for lost profit, which you may incur as a result of the use and existence of the information provided within this AOTH/Richard Mills Report.

Our publications are not a recommendation to buy or sell a security - no information posted on this site is to be considered investment advice or a recommendation to do anything involving finance or money aside from performing your own due diligence and consulting with your personal registered broker/financial advisor. AOTH/Richard Mills recommends that before investing in any securities, you consult with a professional financial planner or advisor, and that you should conduct a complete and independent investigation before investing in any security after prudent consideration of all pertinent risks. Ahead of the Herd is not a registered broker, dealer, analyst, or advisor. We hold no investment licenses and may not sell, offer to sell, or offer to buy any security.