June 2, 2022 (Investorideas.com Newswire) Land position is often the key to not only finding an economic deposit but also ensuring that when you do, it’s all yours. One uranium explorer in the Athabasca Basin just added 732 sq. kilometers to its land package and is looking to dust off some old drill targets and expand its resource base.

For a 51% stake, Skyharbour must issue Rio Tinto's subsidiary, Rio Tinto Exploration Canada Inc., 3,584,014 common shares and CA$508,200 cash and spend about CA$5.8 million on exploration over three years (roughly CA$1.9 million must be spent in the first 18 months). Exploration spending includes a 10% management fee paid to Skyharbour as operator. 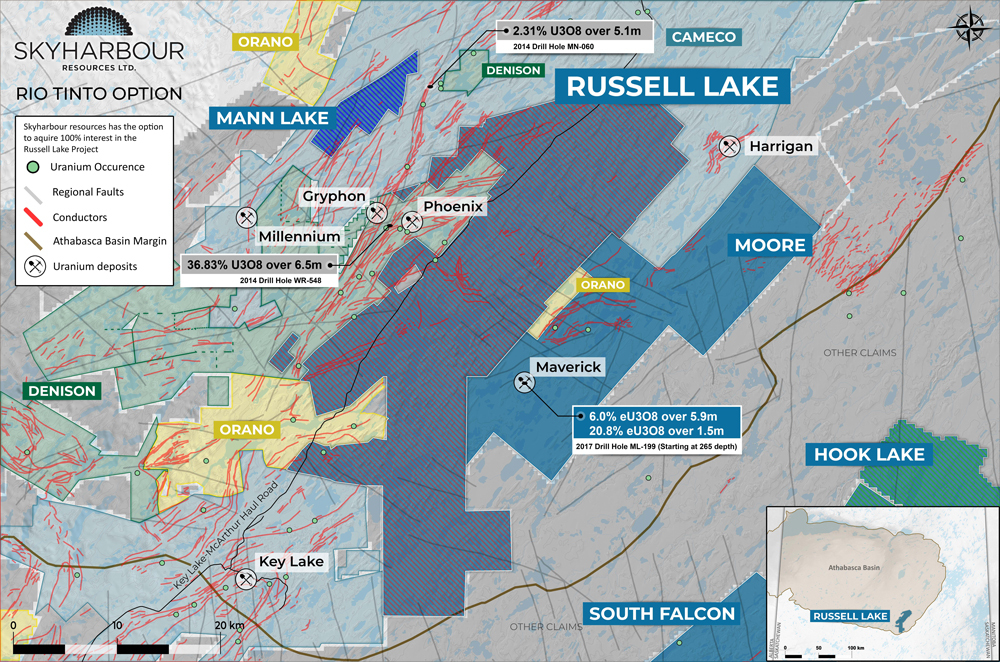 Another option in the property deal could boost Skyharbour's stake to 70%, and a third option would provide the chance to own Russell Lake outright - as long as certain criteria are met.

All the claims are in good standing, and the deal is subject to TSX Venture Exchange approval.

Russell Lake is on the eastern side of the Athabasca Basin and sits between Skyharbour's Moore Uranium project there and Denison Mines' Wheeler River project on the west side (see map).

Meat in the Sandwich

"It's kind of the meat in the middle of the sandwich. We can now kind of tie it together with Moore Lake as dual flagship properties," Skyharbour President and CEO Jordan Trimble told Streetwise Reports.

The property comes with some perks. It's between Cameco Corp.'s (CCO:TSX; CCJ:NYSE) Key Lake mill to the south and MacArthur River - the largest and highest-grade mine in the basin - to the north. A highway runs through the western end of the property, as does a high-voltage power line that provides electricity to the various uranium mines.

Russell Lake also comes with a fully permitted 40-person camp that will serve as Skyharbour's base of operations once the drills start turning again.

"All of this infrastructure will allow us to go in and drill with much lower drilling costs. And cost inflation has been a big issue in the industry as of late," Trimble said.

Russell Lake has seen significant historical exploration, including more than 230 drill holes covering more than 95,000 meters. Data from those holes will help Skyharbour geologists form a plan to carry out more targeted drilling based on modern exploration methods.

Trimble says there are more than 35 kilometers of untested conductors on Russell Lake in magnetic lows, which sometimes indicate the type of rocks that host uranium deposits in the Athabasca Basin. Several zones were drill tested and have shown promise.

Perhaps the most promising target for follow-up drilling is the Grayling Zone, where drilling into a 100-meter-thick sub parallel conductor intersected an 800-meter-long discontinuous zone of basement-hosted uranium mineralization.

Meanwhile, historical drilling at neighbouring Denison's M-Zone along trend from the Grayling Zone intersected basement-hosted uranium of 0.70% U3O8­ over 5.8 meters at a depth of 374 meters.

Drilling Wraps Up at Moore Lake

Skyharbour has just finished a 2,500-meter drill program in seven holes, which followed up on the successes of the 2021 fall drilling program in the Maverick East Zone and the Grid 19 target area, as well as at the Viper area on the 4.7-kilometer Maverick Structural Corridor. Assays are pending, with a follow-up program planned for later in the year.

JVs and Other Projects

Skyharbour has a joint venture with Orano Canada Inc. at the Preston Project. Orano has earned a 51% interest in the project by spending pre-set amounts on exploration and making cash payments. Skyharbour now owns 24.5% of Preston. 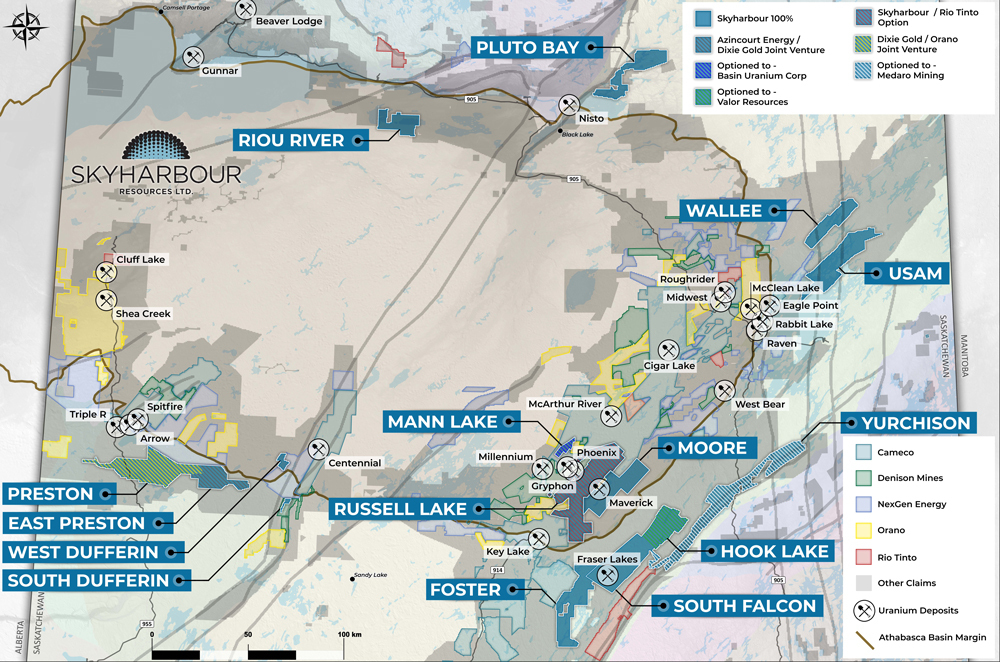 And Skyharbour owns 15% of East Preston Project, a joint venture with Azincourt Energy Corp. (AAZ:TSX.V; AZURF:OTC) where assays are pending for over 5,000 meters of drilling.

Partner company Basin Uranium recently wrapped up its phase one drill program (the first since 2007) at Mann Lake, which consisted of five holes totalling 3,503 meters. The unconformity (typically where uranium mineralization is found in the Athabasca Basin) was intersected between 608 meters to 651 meters downhole in all holes, and several holes intersected uranium dominant, anomalous radioactive intervals in the basement rocks.

The second phase of drilling will be about the same size and is planned for the fall. Gravity and airborne geophysical surveys are set to begin in early June. Results from the first drill holes and the geophysical work will help Basin Uranium and Skyharbour determine the next set of drill targets.

Furthermore, Skyharbour owns 100% of the South Falcon Point Uranium Project on the eastern edge of the basin. The project contains a National Instrument 43-101-compliant resource of 7 million lb U3O8 at 0.03% and 5.3 million lb ThO2 at 0.023%.

Fully diluted, Skyharbour has 167.5 million shares outstanding. Shares in the junior have traded between CA$0.87 and CA$0.30 over the previous year.

2) The following companies mentioned in this article are billboard sponsors of Streetwise Reports: Skyharbour Resources Ltd. Click here for important disclosures about sponsor fees. The information provided above is for informational purposes only and is not a recommendation to buy or sell any security.

4) From time to time, Streetwise Reports LLC and its directors, officers, employees or members of their families, as well as persons interviewed for articles and interviews on the site, may have a long or short position in securities mentioned. Directors, officers, employees or members of their immediate families are prohibited from making purchases and/or sales of those securities in the open market or otherwise from the time of the decision to publish an article until three business days after the publication of the article. The foregoing prohibition does not apply to articles that in substance only restate previously published company releases. As of the date of this article, officers and/or employees of Streetwise Reports LLC (including members of their household) own securities of Skyharbour Resources Ltd., and Azincourt Energy Inc., companies mentioned in this article.