May 24, 2022 (Investorideas.com Newswire) One junior gold explorer in Mexico is finding not only gold but also silver, copper, zinc and lead values in its first drill results at its district-scale project in Sonora state. The polymetallic nature of these early drill results adds promise to some high-grade gold intercepts found elsewhere on the property.

The hole also extended the known size of a breccia (a zone of small, sharp mineralized rocks held together by sediment) at Big Pit that was discovered during previous exploration by another company.

LG-22-05 was among the first set of eight drill holes drilled over a total of 710 meters. All eight hit mineralized structures across the 160-hectare target area. Reyna will drill a total of 10,000 meters across different zones at La Gloria over the next few months.

Reyna Gold CEO Michael Wood says hole LG-22-008 hit a series of seven stacked veins at Pique Viejo, as well as some veinlets, over 81 meters. The hole also helped establish (along with LG-22-007) that the Las Amarillas vein - a new target for Reyna and the fourth major vein at La Gloria - is at least 280 meters long.

"There was no gap greater than 15 meters where there wasn't a vein over that area. And fairly vertical veins as well," Wood told Streetwise Reports. 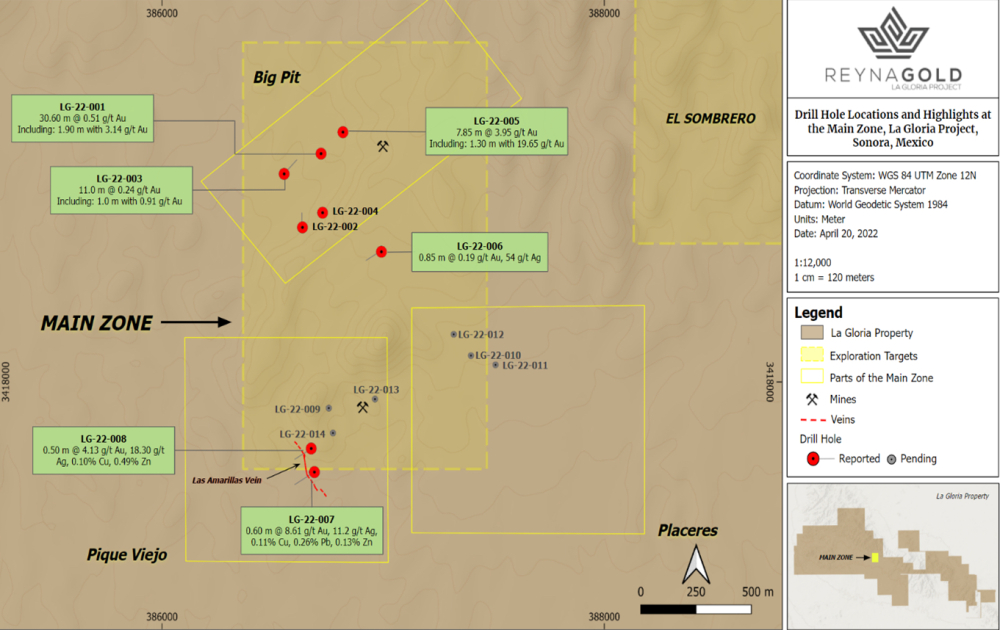 "We're finding that it isn't just pure gold. It is definitely polymetallic in the part of the property we're exploring - Main Zone and El Sombrero," Wood said. "El Sombrero has never previously been drilled by anybody and there are a lot of geological indications that there is a big mineralized system."

Reyna has made Las Amarillas a priority targets for follow-up drilling and is drilling at El Sombrero now.

Reyna's geological team believes that the system could become thicker and higher grade at depth. And they ought to know.

Reyna owes much of its geological success to Peter Megaw.

"Peter's been in Mexico since 1979. He's one of the few established exploration geologists who was working there prior to NAFTA," Wood told Streetwise Reports.

High-profile investor Bob Moriarty agrees. "Reyna Gold is a zero brainer; the greatest geologist in Mexico backs it, that's all you need to know," Moriarty wrote on 321gold.com.

Reyna's 24,215-hectare, district-scale La Gloria project in Sonora state - home to more gold production than any other state in Mexico - is about 2.5 kilometers west-northwest of the former El Chanate open-pit gold mine - which was mined out by Alamos Gold Inc. (AGI:TSX; AGI:NYSE) in 2019.

Fresnillo Plc's (FRES:LSE) 1-Moz Noche Buena gold mine is about twice as far away in the opposite direction. Noche Buena produces over 100 Koz gold per year and is one of three operating Fresnillo gold mines on the trend. Fresnillo's La Herradura, the largest gold mine in Mexico, is another one. 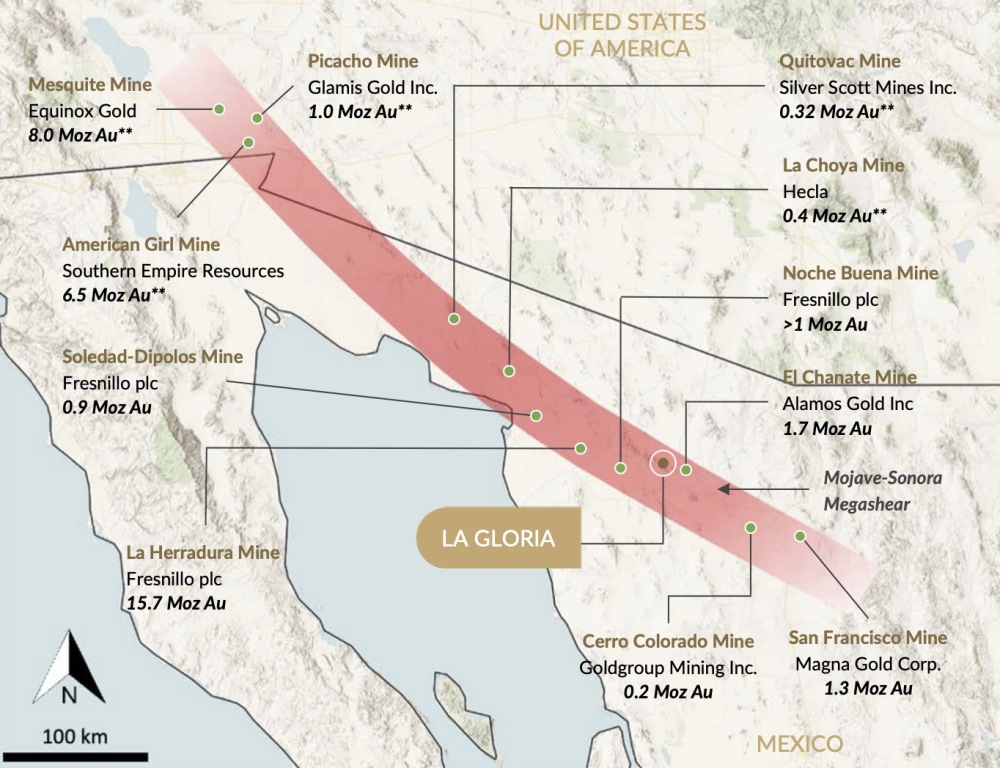 Another hole among the first eight, LG-22-001, proved to be lower grade but more consistent, intersecting 30.6 meters of 0.51 g/t Au from the surface.

Wood says hole 004 hit about 52 meters of mineralized breccia, but the average grade was around 0.1 g/t Au - minimal. Nonetheless, Wood says there are similarities between what the company is finding at La Gloria and the once low-grade El Chanate.

"One thing that we need to educate people on is that is bulk tonnage, low-grade, low strip ratio material would make a high margin mine," Wood said, describing the near-surface geology at La Gloria. "(El Chanate) produced at sub $1,000 all-in costs, as do the three Fresnillo mines on the trend."

El Chanate was designed to produce about 125,000 oz of gold annually for 12 years. Perhaps more importantly, the simple heap-leach operation (crusher, heap-leach pads, and processing plant) cost only $35M to build in 2007.

In late 2009, Capital Gold boosted the resource at El Chanate to 1.5 Moz contained in 70.56 million tonnes at a grade of 0.66 g/t Au. The cut-off grade was an almost unheard of 0.12 g/t Au. More ounces were later added through exploration.

Both El Chanate, La Herradura, and Noche Buena, as well as the La Gloria land package, sit along the prolific Caborca gold belt-where roughly 18 Moz gold have been found so far by different companies.

The belt is part of the Mojave-Sonora Megashear, a broad northwest-trending structural zone that hosts at least four different types of gold deposits: vein, breccia, structurally controlled, and disseminated.

Reyna has more than $9 million left to continue exploration. At a current monthly burn rate of $450,000 or so, that should be enough to last the company until 2023.

About one-third of Reyna is held by institutional investors. The junior counts a number of the major exploration-focused funds as investors including Aussie firm TerraCapital and European funds Commodity Discovery Fund and Commodity Capital among its larger shareholders.

Board members, management, and insiders own about 21% of Reyna.

2) The following companies mentioned in this article are billboard sponsors of Streetwise Reports: Reyna Gold Corp. Click here for important disclosures about sponsor fees. The information provided above is for informational purposes only and is not a recommendation to buy or sell any security.

4) From time to time, Streetwise Reports LLC and its directors, officers, employees, or members of their families, as well as persons interviewed for articles and interviews on the site, may have a long or short position in the securities mentioned. Directors, officers, employees, or members of their immediate families are prohibited from making purchases and/or sales of those securities in the open market or otherwise from the time of the decision to publish an article until three business days after the publication of the article. The foregoing prohibition does not apply to articles that in substance only restate previously published company releases. As of the date of this article, officers and/or employees of Streetwise Reports LLC (including members of their household) own securities of Reyna Gold Corp., a company mentioned in this article.