May 19, 2022 (Investorideas.com Newswire) Sometimes the pieces all come together at the right time. One B.C.-based junior explorer just secured a long-held asset from a major producer in a low-cost, all-equity deal. Now the junior plans to develop and de-risk that copper-gold property into something that rivals its neighbor to the north and others in the district.

"It was a very kind deal from Teck's perspective," Trailbreaker President, CEO and Director Daithi Mac Gearailt told Streetwise Reports. "(Eagle Lake) has been on our radar for about two years."

The price? Trailbreaker issued 125,000 shares to Teck, and part of the Eagle Lake project (the area that formed the Takomkane claims) is subject to a 1% net smelter royalty payable to the major.

Golden Sky Minerals Corp. (AUEN:TSX.V; LCKYF:OTC) President and CEO John Newell is also a technical analyst whose charts and other work can be found here. He has a chart outlining Trailbreaker's technical share price performance since 2019. 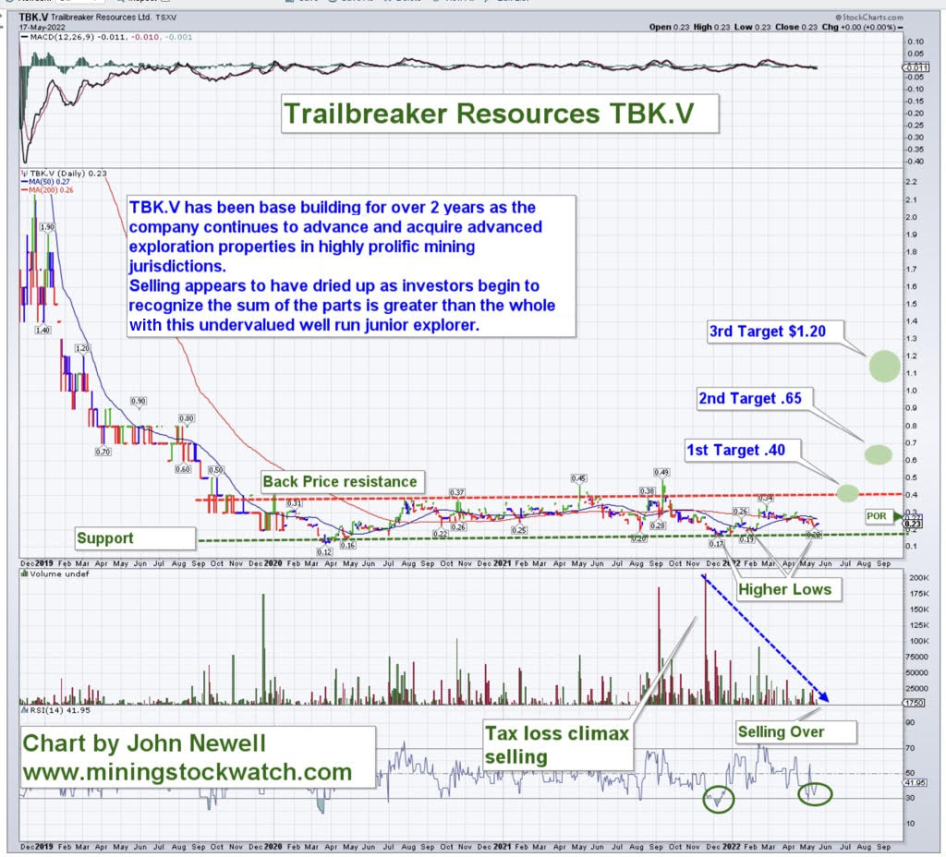 The technical chart for Trailbreaker Resources Ltd. since 2019. Source: www.miningstockwatch.com

Newell says selling in Trailbreaker shares has dried up "as investors recognize the sum of the parts is greater than the whole."

Clive Maund, another technical analyst, sees a similar narrative and rates Trailblazer as an "immediate speculative buy" in a May 18 post.

He writes: "Trailbreaker stock looks like very good value here with a very favorable risk / reward ratio since downside is limited while upside is unlimited, with a good chance that its improving fundamentals, especially the news of the acquisition of the Eagle Lake property, will get it moving against the background of a sector recovery move."

Mac Gearailt says there is a historical drill hole on the south Eagle Lake property. He refers to it as a "gold anchor" in the south as Trailbreaker works toward a "gold deposit in the north."

In 2019, Teck spent about CA$250,000 on a regional-scale till sampling program. Anomalous gold-in-till values were returned from the southern portion of the Eagle Lake property - the same area that hosts the mineralized drill hole. Yet Teck never took exploration beyond those initial stages.

Mac Gearailt hesitates to speak for Teck but reckons the lack of aggression at Takomkane was due to the larger company's ongoing shift away from exploration. Nevertheless, Trailbreaker's exploration plans include drilling, perhaps as early as this fall.

Meanwhile, Trailbreaker will begin to expand on the geochemistry and file for a permit to conduct Induced-Polarization (IP) surveys at Eagle Lake later this month. The surveys send a current through the ground and outline "chargeable" underground masses that often contain ore - then it's a matter of whether or not those masses contain economic ore grades.

Next door, Mac Gearailt says Woodjam has had a lot of success outlining anomalies at depth using IP and then drilling those targets.

Woodjam Not the Only Success Story

Eagle Lake will share the spotlight with the other prized asset in the Trailbreaker fold - the Atsutla Gold project, situated about 70 kilometers south of the Yukon-British Columbia border and 130 kilometers northwest of Dease Lake.

The claim package was recently expanded to slightly more than 400 sq. kilometers. An airborne LiDAR (light detection and ranging) survey for Atsutla is in the planning stage and should start by early summer.

LiDAR surveys produce high-resolution, 3D representations of the Earth's surface. These can detect subtle topographic changes that could be geological features like faults or quartz veins (which can contain gold).

Trailbreaker is already working on permits for an upcoming drill program.

In early May, the company told investors it had acquired the Connector Gold property in the Merritt area of B.C. The claims are half a kilometer north of the past-producing Brenda copper-molybdenum mine. The property has no underlying royalties.

Traibreaker also acquired the 100%-owned Eakin Creek property, about 100 kilometers north of Kamloops. Mac Gearailt says the 16-sq.-kilometer property is in an underexplored portion of the Quesnel terrane that hosts some of BC's producing copper and gold mines, such as New Afton, Highland Valley, and Copper Mountain.

Placer gold was first discovered in Eakin Creek in the late 1800s, with small-scale placer mining continuing through to the 1940s. The hard rock source of the placer gold has yet to be found.

Mac Gearailt, a geologist by training, has spent the better part of the last two decades exploring for economic deposits in northeastern B.C. and Yukon. His work led to the discovery hole at the Lucky Strike gold property in Yukon in 2016, which is now being further explored and de-risked by Golden Sky Minerals.

Mac Gearailt calls northeastern B.C. the "last frontier" due to the lack of exploration that's occurred in the region. 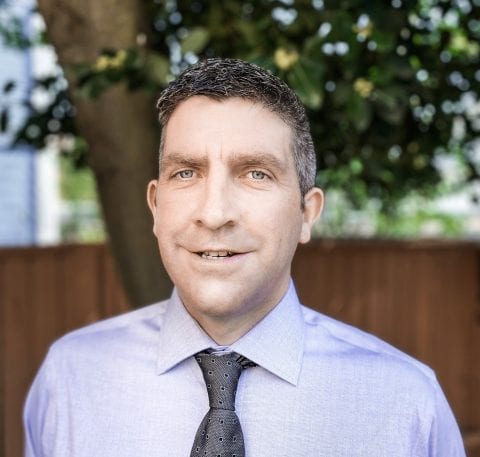 "The people I work with want to find new discoveries. And when we all started working together, that's the promise we made to each other," he told Streetwise Reports. "We're interested in pure discoveries."

Trailbreaker has only 12.7 million shares outstanding - one of the smallest floats in the junior mining space - owing mostly to a 20-1 rollback in January 2020 by predecessor company, Goldstrike Resources Ltd.

Newmont Corp. (NEM:NYSE) still holds roughly 5% of Trailbreaker due to a share deal for the Plateau gold property in Yukon, which was discovered by Mac Gearailt and his team at Goldstrike in 2016. (Mining financier Eric Sprott also held a position at that point but may have since sold off his stake.)

About 30% of Trailbreaker or around 4.2 million shares, remains closely held by management and insiders.

2) The following companies mentioned in this article are billboard sponsors of Streetwise Reports: Trailbreaker Resources Ltd. Click here for important disclosures about sponsor fees. The information provided above is for informational purposes only and is not a recommendation to buy or sell any security.

4) From time to time, Streetwise Reports LLC and its directors, officers, employees or members of their families, as well as persons interviewed for articles and interviews on the site, may have a long or short position in securities mentioned. Directors, officers, employees or members of their immediate families are prohibited from making purchases and/or sales of those securities in the open market or otherwise from the time of the decision to publish an article until three business days after the publication of the article. The foregoing prohibition does not apply to articles that in substance only restate previously published company releases. As of the date of this article, officers and/or employees of Streetwise Reports LLC (including members of their household) own securities of Trailbreaker Resources Ltd., New Gold Inc., and Golden Sky Minerals Corp. companies mentioned in this article. John Newell also owns shares of Trailbreaker Resources Ltd.