January 14, 2022 (Investorideas.com Newswire) Michael Sheikh explains what makes Guanajuato Silver Co. a unique opportunity and takes a look at five other companies that caught his eye.


Guanajuato Silver Co. (OTCMKTS:GSVRF; TSX.V:GSVR) is a junior miner that has had arguably unprecedented operational success over the last year enhancing its cash flow. Junior miners aren't supposed to have cash flow, so that makes Guanajuato a very special exception that mining investors should pay keen attention to.

Despite the exceptional operational success, the stock hasn't really moved too much over the past year. This price stagnation could change as the company ramps up its production, continues in its exploration projects, and potentially makes some moves in the local area to take on some new mining projects that could synergize with their existing sites.

Junior mining used to comprise smaller operational mines but in recent decades the actual mining has largely been left to large-scale operations and thus bigger companies. There's a ton of capital expenditures required for mining and for years companies can raise money and spend it while only really trying to prove whether there's an economic mineral deposit to be mined later.

And this comes only after spending years on-site and millions of dollars on exploration.

For any junior miner, $700 million is a daunting number especially when many have market capitalizations much lower than that.  Most junior miners have a simple plan to get acquired by a larger mining behemoth. For instance, Discovery Silver Corp. (OTCMKTS:DSVSF) recently announced the results of its preliminary economic assessment (PEA), which "positions Cordero [their project] as a Tier 1 silver asset."

According to the company, the project would require "modest development capex of $368 M."

But for Guanajuato, it's a different story. The company acquired an already existing mine with onsite bulk material processing equipment for an aggregate of about $20 million (plus $50 million in milestones) after accounting for some improvements made to the facilities. And now they're already producing from the existing shaft. To have an operational mine with such a low capital cost and a short time to production is truly a testament to the excellent allocation of invested capital.

But to understand the management's excellent decision making and execution to date as well as catalysts that could continue to move shares much higher, one has to understand the history of the company and what the company can do with mergers and acquisitions, or business development in the future.

Guanajuato Silver completed the purchase of its mining assets from another larger silver mining company just 8 months ago, in April of 2021. The asset had previously been purchased from AuRico (now Alamos Gold Inc. (AGI:TSX; AGI:NYSE)) for $200 million by Endeavour Silver Corp. (EDR:TSX; EXK:NYSE; EJD:FSE) before being closed down after producing part of the mine.

Endeavor had plans to increase production from the mine, but as they churned through the wide parts of high-grade mineral, they could not continue to justify mining such tonnage with a declining average grade of silver and gold. And so they suspended El Cubo operations in 2019. In the end, their rationale for closing it was tied to the operational efficiencies of their mining equipment on site. The remaining mineralization of the mine consisted of a thin vein that is only 4.5ft wide but rich in mineralization. The industrial drum cutters used in the mine, as well as the mine plan, usually cut a path that is, for instance, 12 ft wide which introduced a lot of excess rock for processing. This lowered the grade of the ore to the point that it was not cost-effective to mine. Guanajuato Silver addressed this challenge by utilizing a cut and fill technique along with resue mining. The resue mining works by cutting a path along the vein and then removing the ore vein afterward to reduce the amount of rock outside the vein.

Guanajuato decided to take over the project as their revaluation of the deposit showed that the high-grade mineralization was simply narrow in some areas, such that high-quality tonnage could be mined at a narrower width. But this supply wouldn't and couldn't bring the El Cubo processing equipment to maximum capacity. So, Guanajuato is supplementing that production with production from their other mine nearby called El Pingüico. And work is being done to see if the bulk materials from both can be mixed together as they potentially come from the same overall geological vein structure or fracture, thus having similar mineral properties allowing for the same process to be used to extract the gold and silver.

The great thing for Endeavor was that they got to remain somewhat exposed to the project without having to manage it, through part ownership of Guanajuato Silver. Currently, they're the largest shareholder at over 10% ownership. This also is a testament to the legitimacy of Guanajuato Silver's endeavors.

The El Cubo site Guanajuato purchased is really something special. The area has hundreds of years of history as a mining hub and has a vibrant town close by. This means it's easy to hire experienced local mining talent, which both ensure operations run seamlessly and that the local community and government support the company as operations are led by Mexican nationals and the company can help bring wealth into the area. In fact, Guanajuato is working with about 100 Mexican nationals in its operations. 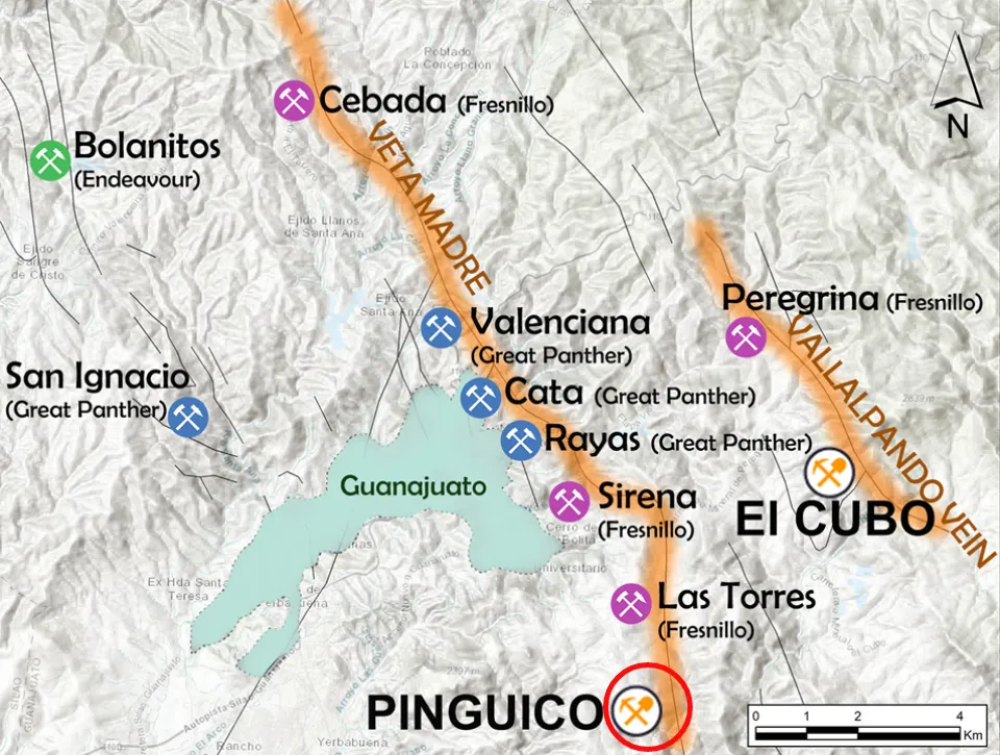 Map of Guanajuato and Notable Mining Sites Nearby

The above map depicts the town of Guanajuato near two main mineral deposits—the Veta Madre (the "Mother Lode"), and another potentially anastomosing/contiguous (coming from the same fault, or branching from the same vein further down in the ground) region, the Villalpando Vein.

The company has mines at its sites, El Pinguico and El Cubo. The company's current plan is to use existing stockpiles at El Pinguico (low grade at surface and medium grade underground) to use up excess capacity at their processing equipment at El Cubo mine while they ramp up El Cubo to its own max capacity.

Both sites together still probably won't keep the processing line at max capacity, so Guanajuato recently announced that they're taking silver and gold mineralized material from third parties:

"James Anderson, Chairman and CEO, said, ‘It is GSilver's intention to use the approximately 20,000 tonne per month of excess capacity at the El Cubo mill to profitably process mineralized material from various potential sources in the Guanajuato area. Whether the business arrangement is designed as toll milling, raw material purchasing, or profit sharing, if it serves to contribute to our bottom line and helps to expand our presence in the 480-year-old mining camp of Guanajuato, then we will pursue it.'" 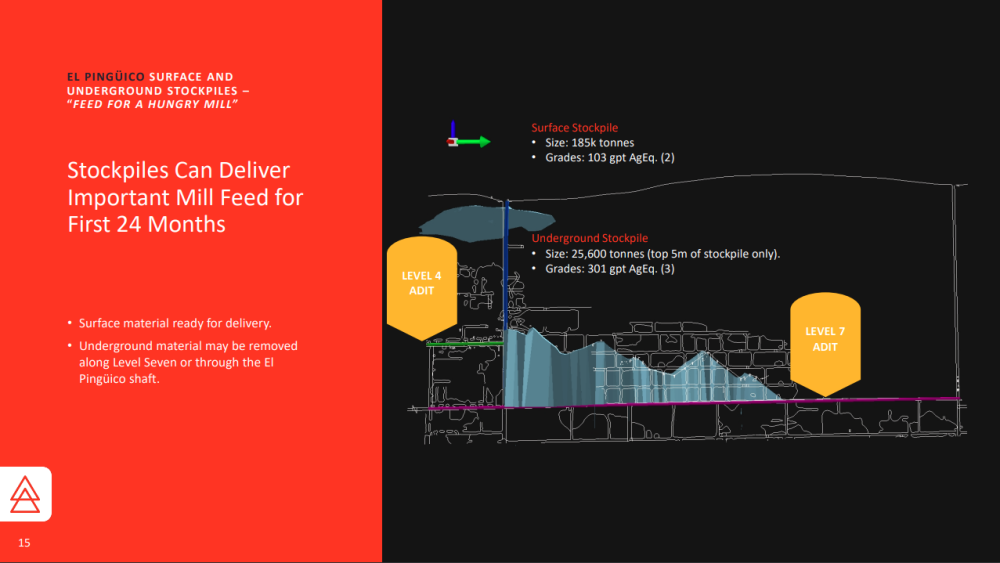 Guanajuato engaged an engineering firm to do a preliminary economic assessment of El Pinguico and El Cubo.

And this is really where it becomes clear that the Guanajuato Silver team are excellent capital allocators and will be able to drive strong returns.

Although their mines were active decades ago and some of the resources were depleted, there are other resources not mined yet and a significant amount of unexplored territory where there is possibly a large amount of medium and high-grade silver.

The company's economic assessment showed a projected internal rate of return (IRR) of 105%, which is extremely high. This is because the sizeable production the company is managing was made possible with such small capital investment in such a short period of time. Another competitor, Discovery Silver Corp (OTCMKTS: DSVSF), reported "excellent project economics" with a projected IRR of only 38% (but a higher NPV). The difference is that Guanajuato's project basically will be able to finance aggressive exploration without significant dilution of the stock. And this exploration and any resources proved from it are not included in the PEA, just the El Pinguico stockpiles and preliminary El Cubo resources.

Guanajuato might also use their cash flows for potential consolidation in the area. With excess capacity at El Cubo, it might make sense to either continue collaborating with other companies running smaller operations in the area or to revive old operations that are currently defunct.

The key thing to keep in mind, however, is that Guanajuato is unlikely to perform any M&A outside Mexico so that they can stay focused and continue executing in a timely and cost-effective manner, something quite uncommonly seen in small-cap companies. Really, any M&A should in some way synergize with existing strategies and operations.

Guanajuato Silver is really only priced based on its existing project. Should the company perform additional M&A or any exploration that would provide it with additional inferred or indicated resources, which could cause a rerating of shares sharply to the upside. With their main two projects existing along the "mother lode" that was the source of a gold rush 500 years ago, continuing strong operations until decades ago, and a new understanding of the geological complexes in the area, Guanajuato has unseen optionality for investors looking to capitalize on its programs before they are obviously proven. The company has been executing flawlessly and now is in a position of strength as it works toward steady, cash flow positive production. The only thing investors don't know is whether Guanajuato will acquire a new project or use the money to explore existing claims. But since the management team has proven themselves to be prudent and savvy, this should be of no concern.