Why gold? Why now?

September 30, 2022 (Investorideas.com Newswire) Why should investors even consider taking a position in a gold junior, given gold's lackluster performance so far this year?

"Traders are ramping up short positions on gold, with fund managers more bearish on the metal than any other time over the past four years, according to a Bloomberg report quoted on Monday by Kitco's regular gold columnist, Jim Wyckoff.

Michael Maharrey, writing a column in Schiff Gold, reminds investors that, when weighed against other asset classes, gold has actually been one of the better performers of 2022:

Gold has outperformed US bonds, foreign bonds, the S&P 500, foreign stocks, the NASDAQ, and US Treasury Inflation-Protected Securities (TIPS). The only things that have outperformed gold are commodities, especially oil and agricultural goods, and the US dollar.

This is confirmed in the chart below by the World Gold Council.

Maharrey makes the following points about gold and the dollar:

How much longer can the dollar trade last? - Richard Mills

Other commentators supportive of gold have injected a sense of reality regarding what Fed officials are doing to try and tame the inflationary beast that has its jaws clamped onto the neck of the global economy.

Ryan McMaken, writing in Mises.org, criticizes the Fed for failing to take bold action to reduce its $9 trillion balance sheet, while maintaining it is serious about fighting inflation through interest rate hikes. Such a move would directly reduce the money supply by reversing QE, and it would also reduce asset prices by producing a deluge of government bonds and mortgage-backed securities. 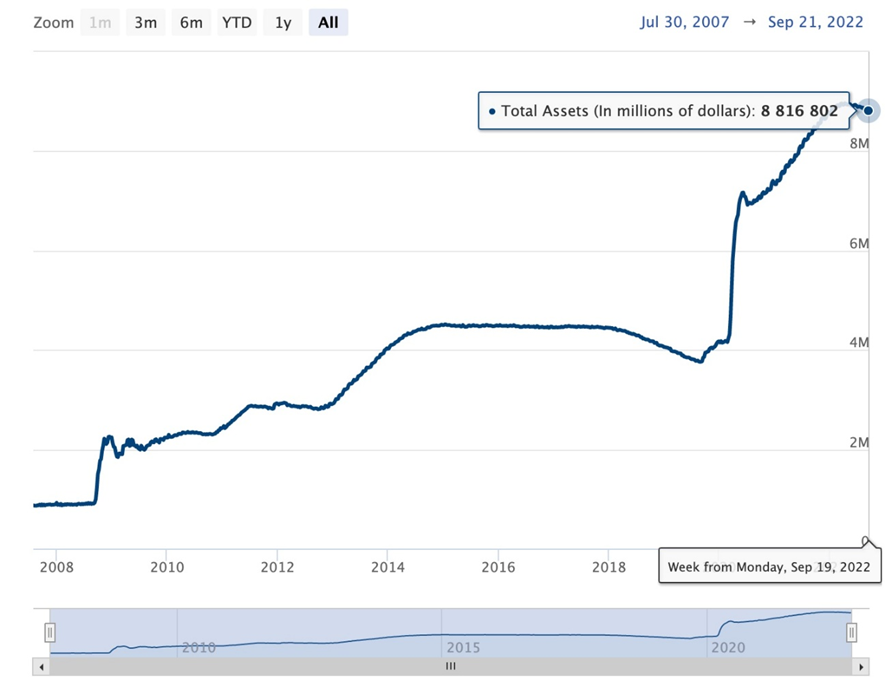 It’s been nearly four months since the Fed announced plans to reduce the portfolio, yet the actual reduction continues to be miniscule... Even now, after immense and rapid price inflation over the past two years, the Fed is still too afraid of fragility in the housing market to put much of its $2 trillion MBS portfolio back into the private sector.

Instead, Powell and his Federal Open Market Committee (FOMC) are focuses on bringing down inflation, no matter what the cost. McMaken writes that many FOMC members say they expect the federal funds rate to hit 4.2% this year and 4.5% in 2023. They think that economic conditions will remain rosy, with GDP above 0% and unemployment keeping to 5%.

This is despite two quarters in a row of shrinking GDP — the classic definition of a recession — an inverted yield curve, and falling home prices due to dramatic rises in mortgage rates. McMaken writes:

[T]he committee is still clinging to the idea that the Fed can steer the economy to a “soft landing” in which inflation will be reined in with no more than some moderate slowing in economic growth.

Powell himself has said that ending the current bout of inflation will require pain in the form of job losses, and he has strongly implied that ending inflation could take years.

McMaken questions whether the Fed and the federal government will politically tolerate a long period of rising interest rates and a decline in the rate of money supply growth, noting the latter is trouble because it points to recession. Our bubble economy is now so addicted to easy money that even a slowing in monetary expansion can send the economy’s many zombie companies into a tailspin. Rising rates are a problem because they can lead to a sizable increase in the federal government’s debt-service payments. This could lead to a fiscal crisis without cuts to popular government spending programs. Virtually no one in Washington wants that...

This will amount to immense pressure on the Fed—from wealthy Wall Streeters, elected officials, and corners of the economic Left—to return to quantitative easing.

Again, if this were to happen, it would be good, very good, for gold.

McMaken saves his dry powder for what the Fed didn't do, and that is to stop inflation-causing quantitative easing, when it had the chance:

Yet the Fed’s real incompetence is already behind us. That came over the past decade, when the Fed absolutely refused to end its quantitative easing efforts even though the economy was clearly in an accelerating expansion. This was especially obvious after 2017, and yet Powell stuck with the usual monetary inflation, because that was the popular thing to do. Then, when the covid crisis came, all restraints on monetary inflation were completely abandoned.

Now, thanks to Powell’s mistakes, price inflation is supercharged, and even he admits it could take years of economic stagnation or decline to bring it under control.

Economist Stephen Roach, writing in Project Syndicate after the Fed in September raised interest rates for the third time in a row, joins the throng of opinion writers, including us at AOTH, who believe the Fed has a long way to go before it is able to put a boot on the throat of the inflation demon.

Roach notes that, with the nominal federal funds rate at 3.1%, it is five percentage points below the 8% three-month average headline CPI inflation rate, making the "real FFR" around -5%.

Moreover, as Roach recalls, the premise of the core inflation rate is to dismiss major price shocks as transitory, something the Fed Chair during the inflationary 1970s, Arthur Burns, did until it was too late (the Volcker Fed had to hike interest rate so high, so fast, that it caused the 1982 recession):

The painful lesson: A Fed that lives by the core can die by the core.

In Roach's view, and I tend to agree with him:

To the extent that monetary policymakers continue to be misled by an inflation problem that proves to be more intractable than a focus on core inflation suggests, they and the financial markets are underestimating the ultimate monetary tightening that will be required to return inflation to a 2% target.

I suspect that the nominal FFR may well have to rise into the 5-6% zone to accomplish that task, implying that the Fed may be only about halfway into its inflation-control campaign. That spells recession in the United States in 2023, which comes on top of the downturn already evident in Europe. China, currently in the midst of an unusually sharp slowdown, is unlikely to be an oasis of growth. A global recession next year is all but inevitable.

During a month in which the S&P 500 has fallen by 12%, John Butler, writing for Fortune & Freedom warns readers to beware of "The Witching Season". He's referring to the months of August to November, when a disproportionate number of major stock market corrections, crashes and even financial crises tend to happen. Examples include the October 1929 stock market crash and the financial crisis of 2008.

Could history repeat itself?

Butler gives a number of reasons in the affirmative, stating for example that:

According to Butler, those who worry about the Witching Season are advised to get defensive in their investment portfolios. With inflation around 10%, anyone sitting on cash is looking at a 4% real loss. Bonds could do worse, especially if inflation expectations creep higher.

Hence, for those who do wish to exit the stock market as we enter the Witching Season, I'd consider exiting into gold instead.

Some readers might object that a gold allocation is "defensive". After all, stock market corrections are frequently associated with declines in precious metals prices too.

But gold is normally less volatile than the stock market. And while there is a small correlation between the two, in major stock market corrections or crashes, gold tends to stabilise and recover first, leading the way out, as markets prepare for some eventual easing of liquidity conditions...

When times are as they are today, with stock markets historically overvalued; debt and leverage ratios elevated; stagflationary forces evident; and geopolitical developments possibly making a dreadful macroeconomic situation even worse, one can justify an unusually large allocation to gold. As indeed I do.

AOTH/Richard Mills has based this document on information obtained from sources he believes to be reliable, but which has not been independently verified.

AOTH/Richard Mills makes no guarantee, representation or warranty and accepts no responsibility or liability as to its accuracy or completeness.

Expressions of opinion are those of AOTH/Richard Mills only and are subject to change without notice.

AOTH/Richard Mills assumes no warranty, liability or guarantee for the current relevance, correctness or completeness of any information provided within this Report and will not be held liable for the consequence of reliance upon any opinion or statement contained herein or any omission.

Furthermore, AOTH/Richard Mills assumes no liability for any direct or indirect loss or damage for lost profit, which you may incur as a result of the use and existence of the information provided within this AOTH/Richard Mills Report.

Our publications are not a recommendation to buy or sell a security - no information posted on this site is to be considered investment advice or a recommendation to do anything involving finance or money aside from performing your own due diligence and consulting with your personal registered broker/financial advisor. AOTH/Richard Mills recommends that before investing in any securities, you consult with a professional financial planner or advisor, and that you should conduct a complete and independent investigation before investing in any security after prudent consideration of all pertinent risks. Ahead of the Herd is not a registered broker, dealer, analyst, or advisor. We hold no investment licenses and may not sell, offer to sell, or offer to buy any security.