Why One Fund Owns 13% of This Small-Cap Pharma

December 13, 2022 (Investorideas.com Newswire) Clinical-stage Algernon Pharmaceuticals' multiple pipelines include testing a psychedelic for the treatment of stroke, and testing other drugs for idiopathic pulmonary fibrosis and chronic kidney disease.


Clinical-stage drug development company Algernon Pharmaceuticals Inc. (AGN:CSE; AGNPF:OTCQB; AGN0:XFRA) has multiple drugs in its pipeline and has garnered the support of AlphaNorth Asset Management, which now holds approximately 13% of the firm's shares.

Why has the firm taken such a large position? AlphaNorth President and CEO Steve Palmer explained in a recent episode of Streetwise Live!: "We like it primarily because of the valuation. It's quite cheap. Currently, the value of the whole company is CA$6-7 million. We also like it because they have multiple programs; I like companies like have multiple shots on goal, so to speak. And the trials that they are conducting are also lower risk than the typical biotech because they are using drugs that are already known to be safe."

Analyst Andre Uddin with Research Capital Corporation follows the company and notes that Algernon has an "in-depth pipeline based on its novel repurposing drug development strategy." He has calculated a CA$10.25/share target price on the company, an implied fourfold return based on the current share price of CA$2.78.

Algernon is about to begin testing the psychedelic compound DMT (N, N-dimethyltryptamine) for ischemic stroke, the type of stroke caused by blood clots blocking the flow of blood in the brain. The current treatment, tPA, must be administered within about three hours of the start of symptoms to be effective, a threshold that a large proportion of stroke victims don't meet.

The company has commenced screening subjects for the Phase 1 clinical study that will be conducted at the Centre for Human Drug Research in The Netherlands and expects to dose the first subject soon. Up to 60 healthy volunteers are expected to participate.

Algernon notes that the purpose of the study is to identify the "safety, tolerability, and pharmacokinetics of DMT when administered as an intravenous bolus followed by a prolonged infusion, for durations which have never been studied clinically. In addition, several pharmacodynamic measures believed to be associated with neuroplasticity, including both measurements of biochemical markers and electroencephalographic readings, will be recorded."

"The potential of a stroke treatment drug is enormous," Christopher Moreau, CEO of Algernon, stated. "On the human side, for approximately 85% of ischemic stroke patients, there is no treatment except to watch and hope. And on the market side, it is estimated to become a US$15 billion market by 2027, and so it's truly global in scale and would have a huge impact on patients who suffer from this terrible injury."

The company noted that its decision to investigate DMT and move it into human trials for stroke is "based on multiple independent, positive preclinical studies demonstrating that DMT, at a sub-psychedelic dose, helps promote structural and functional neuroplasticity. These are key factors involved in the brain's ability to form and reorganize synaptic connections, which are needed for healing following a brain injury."

"The preclinical data shows that DMT promotes the production of brain-derived neurotrophic factor, which is an important part of the brain's recovery process after an injury like a stroke," Moreau stated.

Because other Phase 1 studies have been completed on DMT, the company is not expecting any serious adverse events.

Algernon is also looking into DMT for additional indications. In late October, the company announced that it has entered into a clinical trial agreement with Yale University School of Medicine, New Haven, Conn., for the use of DMT in a Phase 2 depression study. "Although the treatment of psychiatric disorders with DMT [is] not the company's current focus, we have patents pending on novel forms of DMT which could potentially be used across a broad range of diseases," stated Moreau. "In addition, we believe the data generated from this study may help inform Algernon's stroke research program."

Algernon has received from the U.S. Food and Drug Administration Orphan Drug designation for Ifenprodil for the treatment of idiopathic pulmonary fibrosis (IPF). Orphan drug status is conferred on diseases that affect fewer than 200,000 patients in the U.S. and provides tax credits for trials and an exemption from user fees. If the drug receives FDA approval, seven years of market exclusivity are granted.

"We appreciate the U.S. FDA's decision to grant ODD status to Ifenprodil for IPF, a disease for which prognosis remains dismal, with 50% mortality expected within three to four years," said Moreau. "This regulatory milestone comes at an important time in the development of Ifenprodil as a potential new therapy for IPF as we plan the next steps for our clinical program."

Algernon's Phase 2a study of Ifenprodil in patients recently concluded and met its co-primary endpoint "with patients receiving Ifenprodil experiencing no worsening of their lung function, and significant improvements were seen in the frequency of their IPF-associated cough as well. In addition, improvements in patient-reported measures of cough severity and quality of life were observed. Ifenprodil was also confirmed to be safe and well-tolerated in the study."

Research Capital Corp. analyst Andre Uddin noted, "We believe AGN's best asset is ifenprodil for treating refractory chronic cough (RCC) in idiopathic fibrosis (IPF)/IPF patients. . . Based on the positive Phase 2a data, we expect management to advance its 3x per day formulation of ifenprodil and initiate a Phase 2b trial in chronic cough H2 CY2023. A data set from a Phase 2b chronic cough trial would potentially be a large value-creating inflection point."

Technical analyst Clive Maund of CliveMaund.com recently charted Algernon's stock and rated the stock a Buy. He wrote in October that "those interested should aim to buy it as soon as possible." 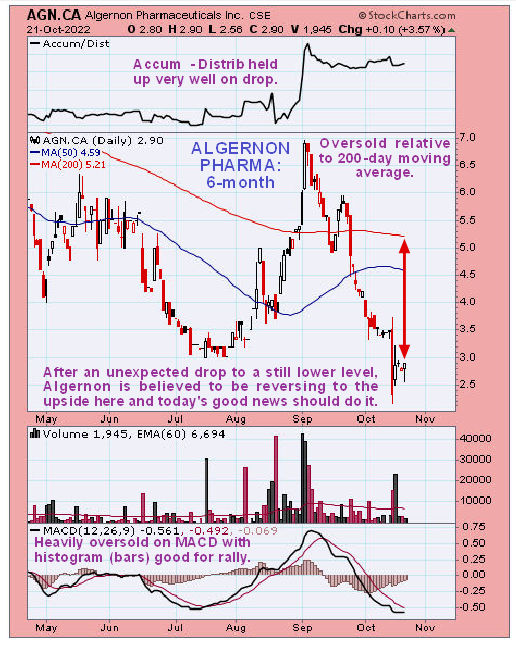 Chris Temple of The National Investor also commented on the stock in a September post, saying that he considered the company an Immediate Buy.

The stock is also covered by analyst Dr. André Uddin of Research Capital Corp. and newsletter writers Gerard Adams of The National Inflation Association, Bob Moriarty of 321gold.com, and Penny Queen of Pennyqueen.com.

Click "See More Live Data" in the data box above to read more of what they are saying.

2) The following companies mentioned in this article are billboard sponsors of Streetwise Reports: Algernon Pharmaceuticals Inc. Click here for important disclosures about sponsor fees. As of the date of this article, an affiliate of Streetwise Reports has a consulting relationship with Algernon Pharmaceuticals Inc. Please click here for more information.

5) From time to time, Streetwise Reports LLC and its directors, officers, employees or members of their families, as well as persons interviewed for articles and interviews on the site, may have a long or short position in securities mentioned. Directors, officers, employees or members of their immediate families are prohibited from making purchases and/or sales of those securities in the open market or otherwise from the time of the decision to publish an article until three business days after the publication of the article. The foregoing prohibition does not apply to articles that in substance only restate previously published company releases. As of the date of this article, officers and/or employees of Streetwise Reports LLC (including members of their household) own securities of Algernon Pharmaceuticals Inc., a company mentioned in this article.

1. This Issuer has generated investment banking revenue for RCC.

Clive Maund has not been paid by the company and does not own shares of Algernon.

Get News Alerts on Biotech Stocks