August 24, 2022 (Investorideas.com Newswire) A Canadian hedge fund doubled its stake in a tiny biotech that demonstrated promising results in a study that used a former Sanofi drug called Ifenprodil to treat idiopathic pulmonary fibrosis and chronic cough. Find out the name of the company and why one analyst has given it a 12-month CA$25 target price - a 560% increase from the unit price in its recent placement.

The deal makes Vancouver-based Algernon a top 20 holding for AlphaNorth, and effectively doubles its position in the tightly held company to about 13%, bolstering its position as Algernon's largest shareholder.

Before the placement, there were slightly less than 2 million shares outstanding, making the company a noteworthy target for value investors.

"It's currently not in the top 20 but with this placement (Algernon) will be going well into the top 20 (positions in the fund). I wanted to have it in the top 20 because it's a higher conviction name, but it's also not the most liquid security, so it wouldn't make sense for it to be among our top three names," AlphaNorth Founder and Chief Investment Officer Steve Palmer told Streetwise Reports.

He added: "It's very timely because you've not only got Algernon with company-specific fundamentals, but you've also got the backdrop of the biotech sector that's improving."

Even before the placement, Palmer says AlphaNorth was buying in the open market on the dips. "I was using the weakness as an opportunity to pick up a bargain and trying to buy in the low CA$3 range," Palmer explained.

Each unit in the placement was priced at CA$3.75 apiece and consisted of one common share, plus a warrant at a strike price of CA$4.25. The warrants are good for up to 5 years from the date issued.

Algernon, however, reserved the right to accelerate the expiry date of the warrants if the volume weighted average price of AGN exceeds CA$12.75 for 20 straight trading days.

If that happens, Algernon has 10 days to issue an acceleration notice to warrant holders and those holders would then have 30 days to either exercise their warrants or watch them expire.

All the securities issued in connection with the closing of the private placement must be held for at least 4 months, plus a day, from the date the securities were issued. 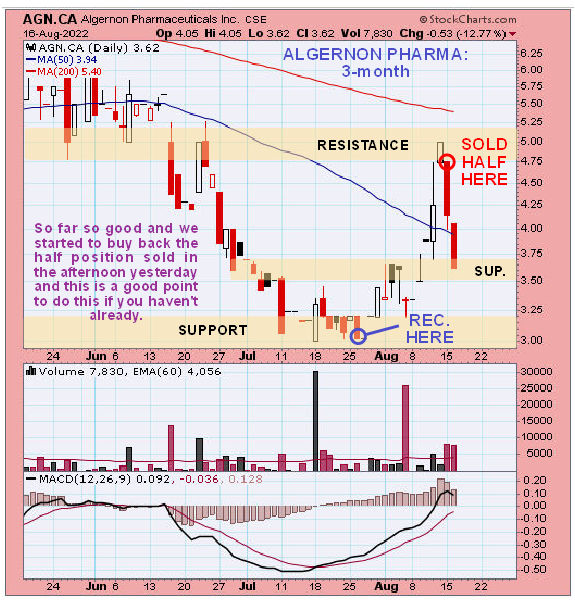 Technical Analyst Clive Maund put out a note after news of the placement broke.

"The case for buying Algernon here could scarcely be stronger, and it is therefore considered to be in order to add to positions or make fresh purchases, and this is definitely a stock that is worth going overweight on," he wrote.

The intense interest in Algernon stems from promising results in a 12-week, Stage 2a proof of concept study using NP-120 or Ifenprodil to treat idiopathic pulmonary fibrosis (IPF) and chronic cough. IPF causes scar tissue to grow inside your lungs and makes it difficult to breathe. It worsens with time.

Study groups in Australia and New Zealand had their lung function measured by forced vital capacity (FVC) - where patients blow into a device that measures the force of their blowing - at the start of the trial, then again after 12 weeks.

Of the 20 IPF patients who enrolled, 13 or 65% had stable or improved FVC over the 12 weeks, whereas 40% of those treated with a placebo demonstrated similar or higher FVC over those 12 weeks.

Yet a closer look at the topline data from the study revealed that NP-120 also performed well in the IPF patients suffering from chronic cough. While chronic cough is a condition on its own, there is also a subset of patients that have IPF who also have chronic cough and they are difficult to treat.

Algernon Scientific Advisor Dr. Jacky Smith, who is considered global expert on cough, was largely absent (due to illness) for the first look at the study's topline data. But once she was able to conduct a more rigorous examination of the dataset, she realized that there had been an even greater improvement in cough counts than originally reported by the company.

Dr. Smith concluded that the 24-hour cough counts were reduced by 32% at four weeks and 39.5% at 12 weeks, compared to the baseline.

"Dr. Smith has been instrumental in helping Bellus Health Inc. (BLU:TSX) advance (its) chronic cough candidate - hence her opinion on Algernon's cough candidate should not be taken lightly," Uddin wrote.

Algernon CEO Christopher J. Moreau seems to agree with the analyst. Afterall, the market for IPF is about $4 billion, vs $1 billion for chronic cough. And he must factor in the company's capital resources.

"We are heading in the direction of investigating IPF with cough and not cough on its own," Moreau told Streetwise. "It is four times the size in terms of the market and currently there is no drug in advanced clinical studies that is able to address both conditions."

Uddin has a 12-month target price of CA$25 on Algernon.

Algernon scientists will soon get the full Stage 2a study dataset. So far, only the topline data has been examined. The company and its scientific team will take some time to review the data and will likely publish the findings in early September.

The company will seek guidance from the U.S. FDA on a second Phase 2b study on the use of NP-120 to treat IPF and chronic cough by filing a pre-IND application. The second study will likely begin in mid-2023.

The next priority for Algernon after Ifenprodil is DMT or dimethyltryptamine, a psychedelic drug Algernon is researching to determine if it provides better outcomes for ischemic stroke patients - a market thought to be worth $40 billion annually.

The company expects to receive approval sometime in September for a Phase I study on DMT. The company will be testing an intravenous formulation of DMT and will provide the drug to patients for various durations. (Phase I studies determine whether a drug is safe for humans.)

DMT has been shown in pre-clinical studies to cause neurons to grow and make new connections - a process called neuroplasticity, which is necessary after the brain suffers an injury.

Moreau estimates that it will take about 45 days to begin treating patients in the study once it gets the greenlight.

Another drug known as Repirinast, which was initially developed to treat asthma, is being repurposed by Algernon to treat chronic kidney disease. The company is synthesizing its own formulation of the drug, which will move quickly into a small Phase 1 study. Repirinast was originally developed by Mitsubishi Tanabe Pharma for the Japanese market.

The U.S. Securities and Exchange Commission and the NASDAQ have conditionally approved Algernon for a NASDAQ listing provided the company meets certain pre-specified financial conditions.

Palmer says his hedge fund has a significant weighting in the biotech sector. He believes the sector is poised to continue to rebound in the second half of 2022.

"This year has been tough year to date, but my view is that markets have bottomed and there's going to be a good run here for the majority of sectors, including biotech over the next 12 months," Palmer told Streetwise Reports.

AlphaNorth Asset Management is a long bias Canadian-focused hedge fund based in Toronto. The fund won first place in the Best 5-year Return category at the 2021 Canadian Hedge Fund Awards with an annualized return of 40.3%. The minimum investment for accredited investors is $25,000, with a 90-day redemption period.

2) The following companies mentioned in this article are billboard sponsors of Streetwise Reports: Algernon Pharmaceuticals Inc. Click here for important disclosures about sponsor fees. As of the date of this article, an affiliate of Streetwise Reports has a consulting relationship with Algernon Pharmaceuticals Inc. Please click here for more information.

5) From time to time, Streetwise Reports LLC and its directors, officers, employees or members of their families, as well as persons interviewed for articles and interviews on the site, may have a long or short position in securities mentioned. Directors, officers, employees or members of their immediate families are prohibited from making purchases and/or sales of those securities in the open market or otherwise from the time of the decision to publish an article until three business days after the publication of the article. The foregoing prohibition does not apply to articles that in substance only restate previously published company releases. As of the date of this article, officers and/or employees of Streetwise Reports LLC (including members of their household) own securities of Algernon Pharmaceuticals Inc., a company mentioned in this article.

This article does not constitute investment advice. Each reader is encouraged to consult with his or her individual financial professional. Any action taken as a result of reading information here is the reader's sole responsibility.

Get News Alerts on Biotech Stocks