With names like Bullseye, Luckystrike, and Hotspot we'd forgive you for thinking this is a tangy BBQ sauce review. That said, on Thursday Golden Sky Minerals Corp. (AUEN:TSX.V; LCKYF:OTC) published some mouth-watering drill results on its Hotspot property in Yukon that pushed the stock up almost 20% on volume exceeding 43,000 shares in intraday trading on November 18.

Even more impressive was the subsection of the original 102-meter intercept contained a juicy 1.05-meter zone grading 42.4 g/t gold - news that set chatrooms abuzz on CEO.ca with the idea that Golden Sky might be drilling off a low-sulfidation epithermal copper-gold porphyry system.

One post by @engineer said: "19.25 million shares outstanding its (sic) a tight one. ... Excited to see the next holes!"

In the coming weeks, Golden Sky will publish the results from the three remaining holes in the junior's four-hole, 1,317-meter drill program that was completed earlier in the fall on the 100%-owned Hotspot. A company spokesperson says the assay lab said the Hotspot drill results would arrive more than a week ago.

A qualified person must review the drill results before they're published. If the results are similar to those released on November 18, they could provide another catalyst for the share price.

"When I came to this company in basically December 2019, I said from $0.20 to $20 in six years or less. And I'm sticking to that," John Newell, president and CEO of Golden Sky, tells Streetwise.

Technical analyst Clive Maund reported that he bought Golden Sky Thursday morning, after the drill results had reached the market, leading AUEN to break out of a holding pattern it had been fixed in since August (see the six-month chart below). 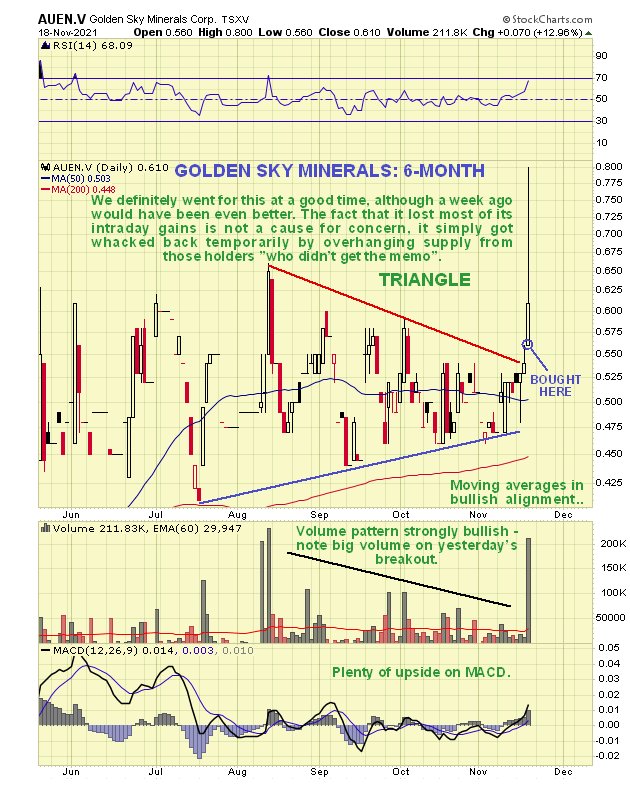 Maund's analysis: "Although it may initially seem disappointing that it lost most of its intraday gains by the close (November 18), with an apparently bearish 'shooting star' candlestick forming, the very high volume on this breakout suggests that it is genuine so the retreat later in the day and the deceptive drop in the accumulation line are thought to signal nothing more than overhanging supply kicking in from those who 'didn't get the memo' about the results and having been frustrated by the earlier non-performance sold onto the higher price, driving it back down."

Golden Sky's one-year chart from StockCharts.com suggests that there is more upside to come (see chart below).

Maund writes: "The one-year is interesting as it shows us that all of the action from the May spike higher until yesterday's breakout constituted the handle of a cup and handle base and yesterday it started to break out from this pattern."

"It has yet to clear the resistance at the top of the pattern, which is what brought it back down in the late trade yesterday, but the impressive volume suggests that it will soon proceed to do so, he asserts.

He adds: "Having bought yesterday morning (November 18) we therefore stay long and it is a buy on any dips and provided the price is not far above last night's close."

The initial program used reverse-circulation drills that could not go any deeper. The 2021 drill program is the first to use drills with diamond drill bits.

Hole HS-21-02 was drilled to test the western extension of a gold-in-soil anomaly measuring about 600 meters by 400 meters outlined by Golden Sky in the Sure Bet zone. The anomaly marks the southwest end of a 1.6-kilometer gold-in-soil trend that extends to the northeast, where it remains open.

"These results are truly exciting, as they demonstrate that a near-surface, auriferous system exists on the Hotspot property," says Cameron Dorsey, Golden Sky's vice president of exploration.

In addition to Hotspot, Golden Sky also has the Bullseye and Luckystrike projects in Yukon. 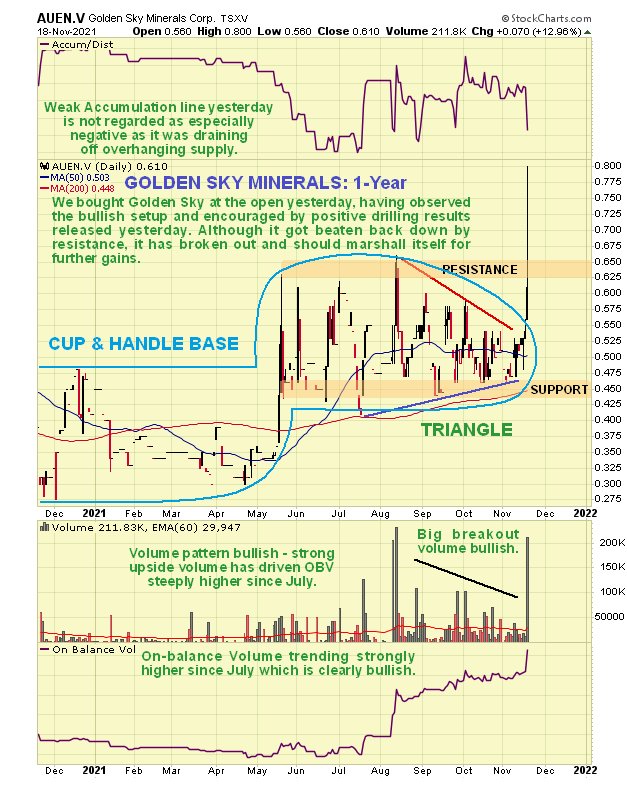 3) The article does not constitute investment advice. Each reader is encouraged to consult with his or her individual financial professional and any action a reader takes as a result of information presented here is his or her own responsibility. By opening this page, each reader accepts and agrees to Streetwise Reports' terms of use and full legal disclaimer.

4) From time to time, Streetwise Reports LLC and its directors, officers, employees or members of their families, as well as persons interviewed for articles and interviews on the site, may have a long or short position in securities mentioned. Directors, officers, employees or members of their immediate families are prohibited from making purchases and/or sales of those securities in the open market or otherwise from the time of the decision to publish an article until three business days after the publication of the article. The foregoing prohibition does not apply to articles that in substance only restate previously published company releases. As of the date of this article, officers and/or employees of Streetwise Reports LLC (including members of their household) own securities of Golden Sky Exploration, a company mentioned in this article.