Looking Below the Surface for Nevada's Missing 200 Moz of Gold

April 28, 2021 (Investorideas.com Newswire) Nevada Exploration is using new methods for finding prospective land in Nevada and should have an indication in six months if its concept bears out.


Nevada is on everyone's list right now as THE place to search for gold. The annual Fraser Institute survey of mining companies put Nevada on top for investment attractiveness globally.

But James Buskard, president of Nevada Exploration Inc. (NGE:TSX.V; NVDEF:OTCQB), points out that gold is not evenly distributed throughout the state. "The vast majority of gold in Nevada is from Carlin-type deposits, of which 80% come from three camps: Carlin, Cortez and Turquoise Ridge," Buskard tells Streetwise Reports. "These big Carlin camps were discovered and ultimately put into production in the late 1970s, early 1980s. Nevada went from producing less than half a million ounces of gold per year in the early 1980s to 8.9 million ounces a year in 1998."

Then Nevada discovery rates plateaued and began to fall by the mid-1990s, he noted. "The big Carlin discoveries are down to about one a decade or less, and Nevada's gold production has fallen 45%, from 8.9 million ounces a year in 1998 to about 5 million ounces a year. Expenditures have gone through the roof but discoveries have gone through the floor." 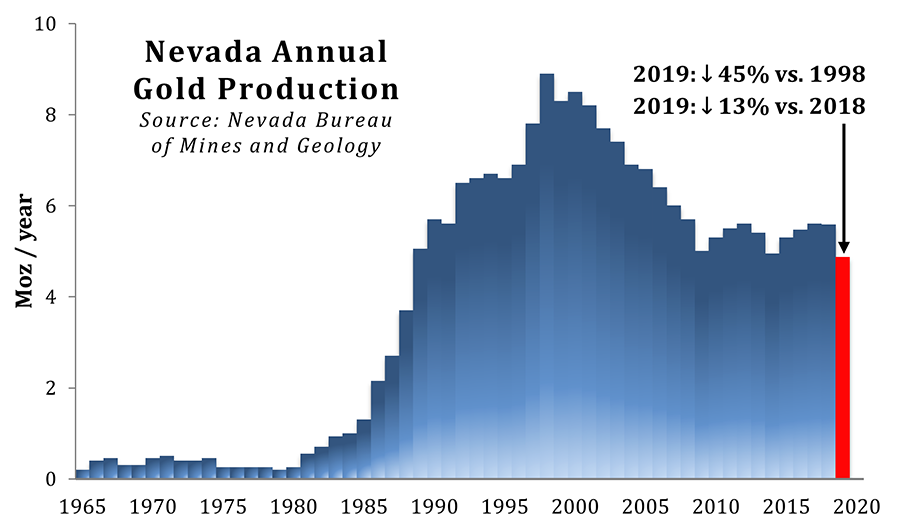 How do you get back to making those large discoveries, Buskard asks. "Every scrap of bedrock in Nevada that's sticking out of the ground has now been very well explored by competent people using the best tools available. That's resulted in an incredible gold endowment, but less than 50% of Nevada's bedrock is sticking out of the ground. The rest is hidden under vast desert valleys that are covered by sand and gravel. The standard tools don't work well where you can't see the rocks, so more than half of Nevada has been underexplored."

Buskard noted that the Nevada Bureau of Mines and Geology and the U.S. Geological Survey estimate Nevada's gold resource at 200–250 million ounces in the rock that is visible, and the consensus is there is another 200 million ounces waiting to be discovered below Nevada's valleys.

"This is the biggest prize and the biggest challenge to be solved anywhere in the exploration space, and the rest of the industry hasn't had a strategy to even get started," Buskard said. "We founded Nevada Exploration to be the first company to build the workflows to systematically target Nevada's missing 200 million ounces of gold."

The company looked to Australia. "Some 75 to 80% of Australia's bedrock is hidden under cover," Buskard noted, "so Australia's government, industry and academia have looked at this issue and have leveraged much more sensitive laboratory tools with detection limits that are two or three orders of magnitude lower than before. This allows us to detect gold and other commodities in sampling mediums that weren't available to us before."

Nevada Exploration and other companies around the world are demonstrating that the most important new medium for undercover exploration is groundwater. "Groundwater flows along the bedrock, dissolves the bedrock and effectively samples it for us," Buskard explained. "We can drill relatively inexpensive holes to sample the groundwater; we can use existing wells, windmills, springs and ranches and can also drill our own relatively inexpensive holes to sample the groundwater. And we can begin to map the bedrock geochemistry using groundwater. This hydrogeochemistry is being used elsewhere—Australia, Chile, southern Africa—but we are the first group to systematically incorporate this exploration tool to go after Nevada's covered gold endowment."

The company has focused its efforts in north-central Nevada and has collected more than 6,000 groundwater samples. "The valleys are wide open, which means that when we come up with prospects, we have been able to stake claims in areas where Nevada's other explorers haven't had the tools to know where to begin," Buskard said. "We've been assembling our land package for 15 years now." 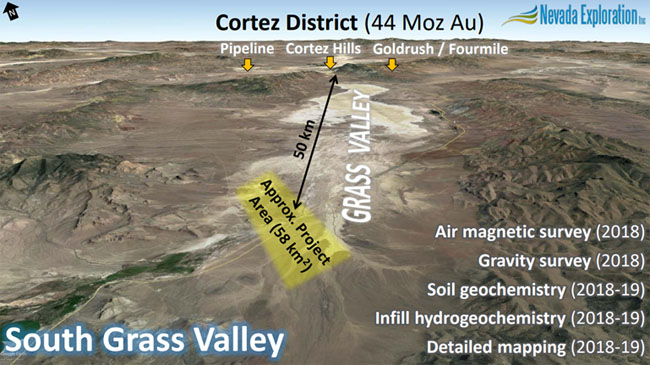 The company has begun its next round of drilling to test a target, East Golden Gorge, for potential economic grade. "We've gone from looking at north-central Nevada, down to a particular project. We've identified all the features that we believe are required to support a camp-scale mineral endowment, and based on all the work we've done we are now focusing on one particular target that we're testing and hoping for some positive results," Buskard stated. 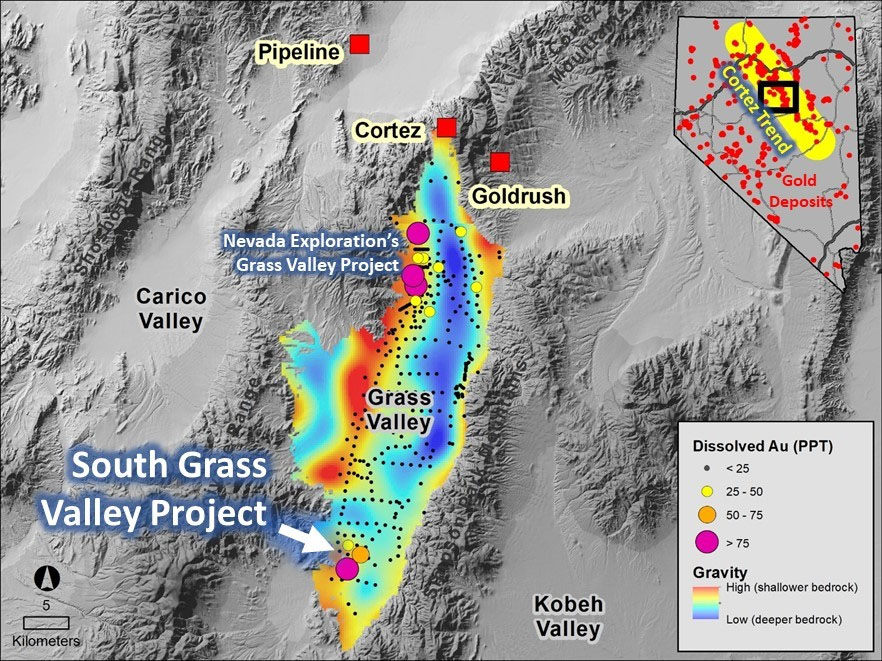 The planned drilling program includes 10 holes, each 4,000 feet deep, for a total of around 40,000 feet of drilling. "What's so exciting about East Golden Gorge is how big it is. The target is comparable in size to the Goldrush deposit at the north end of the valley that is 8 million ounces with a relatively high-grade, 10 grams per tonne, resource," Buskard noted.

The company expects each hole to take around six weeks to drill, and expects lab turnaround in the eight-week range. "So by the time we put three to four holes into the project—within the next six months or so —we're going to have a pretty good idea of whether or not our exploration concept is hanging together," Buskard said.

Nevada Exploration is led by an experienced team, having collectively been involved in the discovery of more than 40 million ounces of gold in Nevada. CEO Wade Hodges was formerly senior exploration manager for Santa Fe Pacific Gold Corp. until its $2.5 billion merger with Newmont. While at Santa Fe, he led teams that discovered Lone Tree and Twin Creeks.

President James Buskard is a recognized leader in undercover exploration, with more than 15 years of experience in Nevada, and a background in generative exploration, applied hydrogeochemistry and environmental science..

Senior Technical Advisor Simon Griffiths was formerly Barrick's global chief geochemist and a member of the discovery team at the 8 Moz Goldrush at the north end of Grass Valley.

2) The following companies mentioned in this interview are billboard sponsors of Streetwise Reports: None. Click here for important disclosures about sponsor fees. As of the date of this article, an affiliate of Streetwise Reports has a consulting relationship with Nevada Exploration. Please click here for more information. The information provided above is for informational purposes only and is not a recommendation to buy or sell any security.

4) From time to time, Streetwise Reports LLC and its directors, officers, employees or members of their families, as well as persons interviewed for articles and interviews on the site, may have a long or short position in securities mentioned. Directors, officers, employees or members of their immediate families are prohibited from making purchases and/or sales of those securities in the open market or otherwise from the time of the decision to publish an article until three business days after the publication of the article. The foregoing prohibition does not apply to articles that in substance only restate previously published company releases. As of the date of this article, officers and/or employees of Streetwise Reports LLC (including members of their household) own securities of Nevada Exploration, a company mentioned in this article.