March 19, 2021 (Investorideas.com Newswire) McAlinden Research Partners looks at how the battery technology sector is boosting demand for lithium and nickel, and what that means for companies in those metals markets.


Battery storage capacity surged through 2020, intensifying in Q4. Many believe increasing deployment will bleed into this year across residential, utility and vehicle markets. That trend bodes well for producers of key battery metals like lithium and nickel.

Just this week, it was discovered that Tesla is installing utility-scale battery storage in Texas, a state recently whacked by unprecedented winter storm-induced power outages. That project will compliment Enel Américas S.A.'s battery storage deployment elsewhere in the state.

In the aftermath of a massive winter storm that paralyzed energy infrastructure across the southern United States, deadly and long-lasting power outages in Texas left many wondering what could be done to prevent it from happening again.

As MRP noted at the time, no source of energy was spared. Oil and gas capacity was literally frozen in, along with wind and solar generation. Therefore, the answer may lie in retail and utility-scale battery storage technologies.

As Bloomberg reported, a Tesla subsidiary registered as Gambit Energy Storage LLC is quietly building a more than 100 megawatt (MW) energy storage project in Angleton, Texas, a town roughly 40 miles south of Houston. A battery that size could power about 20,000 homes on a hot summer day when the grid is especially strained.

Tesla Energy, which is already partnered with PG&E to deploy 182.5MW of battery storage in California, could represent up to 30% of the company's total revenue by the 2030s, up from roughly 6% today, according to analyst Alexander Potter of Piper Sandler. His research has highlighted the potential for Autobidder, a software platform Tesla designed for utilities.

While the Gambit project is a groundbreaking development for the future of Tesla and Texas's power grid, it's not the only battery storage project under construction in the state.

For all of 2020's pitfalls, it was a great year for battery installations. Per Wood Mackenzie, more batteries were powered up in the last three months of 2020 than in 2013 through 2019 combined.

"We had, in 2020, a total of about 3,500 megawatt-hours deployed this year as a whole," WoodMac analyst Chloe Holden said. That's about the amount of electricity that 329 American homes consume in a year. "In 2021, we expect to see that climb by almost four times," she continued. After that huge spike, which is predicted based on previously announced projects, Wood Mackenzie estimates more gradual growth through 2025.

This year is equally as promising, as the U.S. battery energy storage market is set to grow from 1.2 gigawatts (GW) in 2020 to nearly 7.5GW in 2025, driven primarily by large-scale utility procurements.

The Energy Information Administration (EIA) expects the capacity of utility-scale battery storage to more than quadruple in 2021, with 4.3GW of battery power capacity additions slated to come online. The rapid growth of renewables, such as wind and solar, is a major driver in the expansion of battery capacity, because battery storage systems are increasingly paired with renewables.

Investment in battery storage has been helped along by tumbling battery prices over the last few years. Last October, the EIA announced that the average cost of utility-scale battery storage in the U.S. decreased by nearly 70% between 2015 and 2018.

"If you look at what's going on in storage, in about 10 years—2030—the battery industry will grow about 10 times bigger," Yi Cui, the director of Stanford University's Precourt Institute for Energy, has recently predicted. "That's reaching somewhere about 2 terawatt-hours of the battery capacities," he added.

Battery storage often works in tandem with green technologies to accelerate a shift to renewable energy. Some research shows that a large-scale buildout of batteries will be absolutely necessary to facilitate the transformation. A report by the University of California, Berkeley, exploring the shift to renewable power, suggests the United States would need 150GW of storage to achieve a 90% clean energy grid by 2035.

Tesla and LG Chem currently dominate the U.S. home battery market. Both use the lithium-nickel-manganese-cobalt-oxide (NMC) chemistry favored by the electric vehicle (EV) industry. Each of the companies also play a huge role in the growth of battery-powered EVs.

General Motors (GM) is currently working on plans to build a second battery factory in the U.S. with LG Chem as joint-venture partner. The Wall Street Journal notes that the two companies are building a $2.3 billion battery plant in northeast Ohio that is expected to open next year and eventually supply enough batteries to power hundreds of thousands of vehicles annually. The new plant is likely to be a similar-size investment, some of the people said.

As we noted back in August, there are over 100 battery megafactories planned around the world.

According to Adamas Intelligence, Tesla and its world-renowned "gigafactories" deployed more passenger EV battery capacity and battery materials, namely lithium, nickel and graphite, than its four closest competitors combined in 2020. That level of production was great news for LG, since Tesla's made-in-China Model 3s include high-nickel NCM 811 cells from LG Chem.

The country's vehicle market, the largest in the world, is increasingly critical when it comes to electrification. EV sales are expected to rise by 40% from a year earlier, to 1.8 million units, per the China Association of Automobile Manufacturers (CAAM).

According to S&P Global Platts' China Battery Metals Outlook for 2021, some 96% of respondents expected China's demand for lithium metals to rise further this year, with stimulus measures expected to boost demand for EVs. Between 91% and 78% of market participants canvassed thought China's battery-grade lithium carbonate and hydroxide prices will be higher this year than last. About 56% believed there will be a big recovery in the battery metals sector this year.

While the lithium supply is always the top focus for battery producers, Tesla is becoming increasingly concerned with nickel. Just last week, the company agreed to partner with a nickel mine in New Caledonia in an effort to secure more of the resource. Not long before inking that deal, Elon Musk, the CEO of Tesla, tweeted, "Nickel is our biggest concern for scaling lithium-ion cell production."

Benchmark nickel prices were trading at a six-year high as recently as last week on expectations surging demand from the electric-vehicle sector would spur a shortage.

Lithium faces similar worries, as MRP noted last month. Per Albemarle Corp., global supplies of lithium used to make most batteries may fall short of projections for demand to more than triple by 2025 if prices do not rebound to fund expansions. We have been sounding the alarm on a potential supply crunch in the lithium market since 2018.

In that same vein, MRP launched our LONG Battery Metals theme on Aug. 14, 2020. To track the performance of this theme, we have utilized the Amplify Advanced Battery Metals and Materials ETF (BATT).

BATT provides exposure to lithium, as well as the other metals critical for battery storage capacity—particularly cobalt, nickel, manganese and graphite—via publicly traded stocks. Companies in the portfolio are principally engaged in the business of mining, exploration, production, development, processing or recycling of advanced battery metals and materials.

Since the launch of the theme, BATT has returned 42%, more than tripling an S&P 500 gain of 13% over the same period. 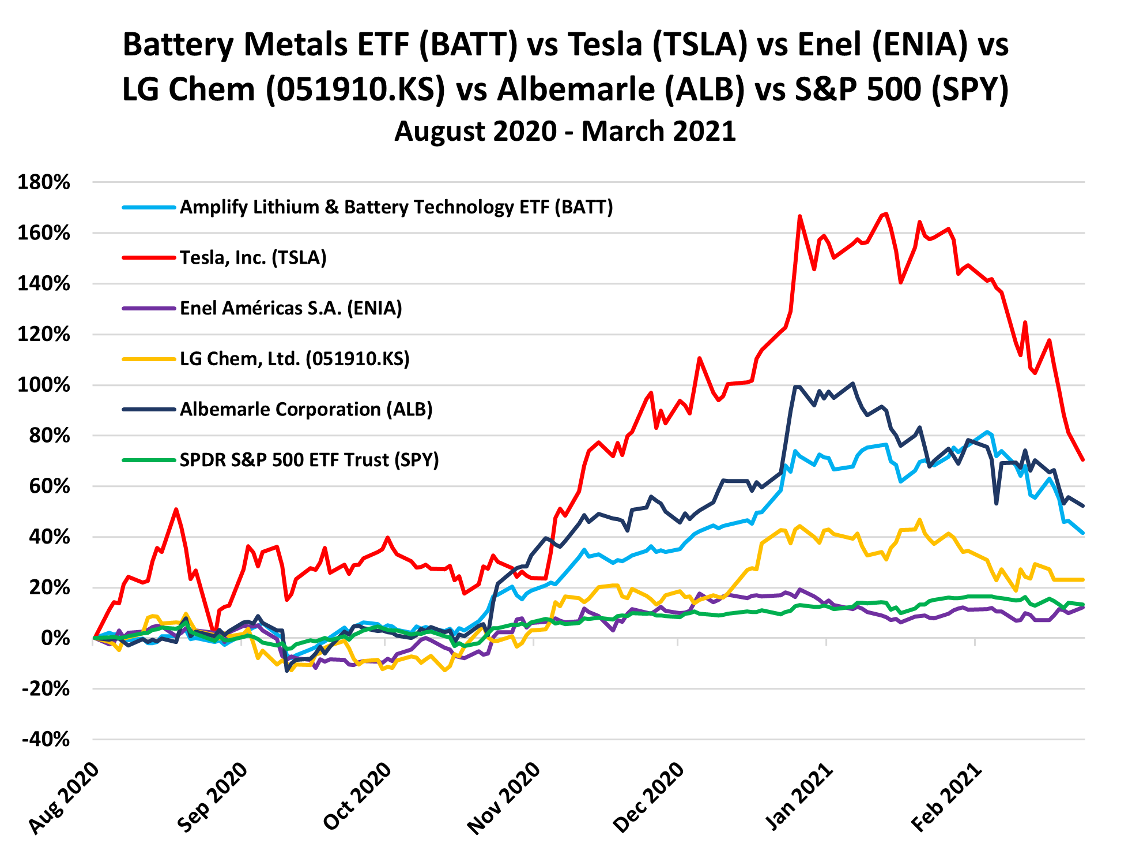 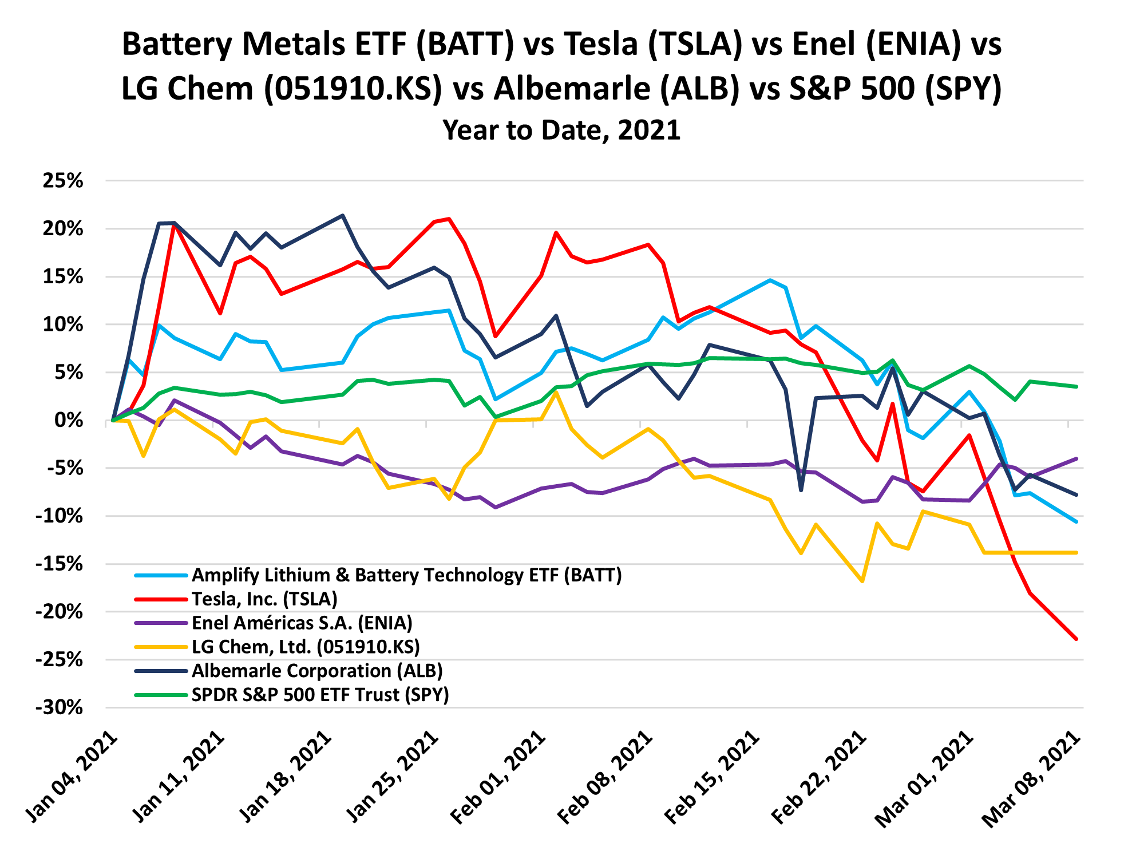 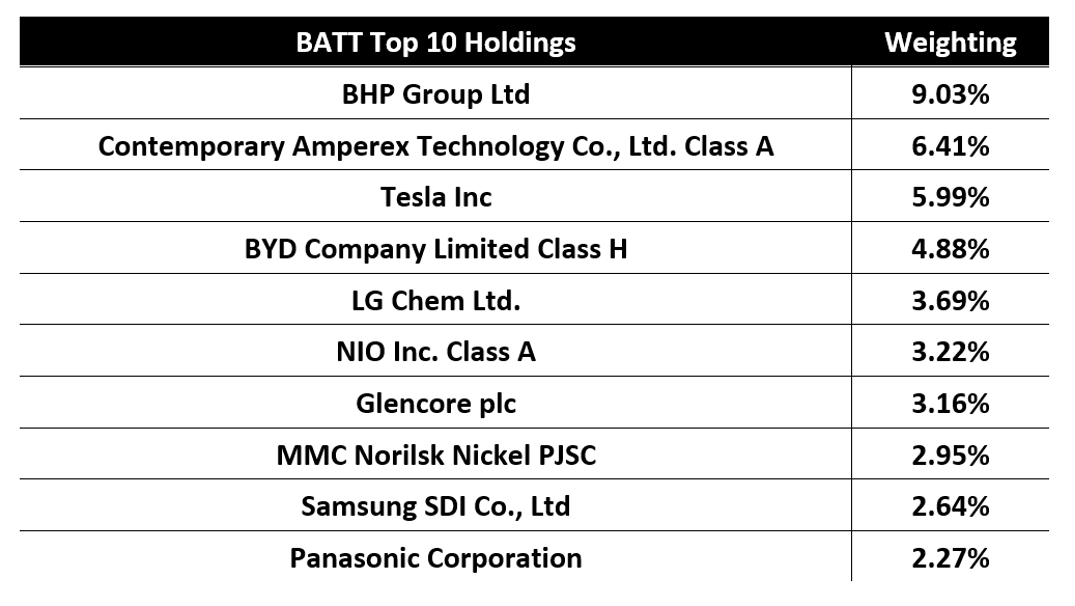 McAlinden Research Partners (MRP) provides independent investment strategy research to investors worldwide. The firm's mission is to identify alpha-generating investment themes early in their unfolding and bring them to its clients' attention. MRP's research process reflects founder Joe McAlinden's 50 years of experience on Wall Street. The methodologies he developed as chief investment officer of Morgan Stanley Investment Management, where he oversaw more than $400 billion in assets, provide the foundation for the strategy research MRP now brings to hedge funds, pension funds, sovereign wealth funds and other asset managers around the globe.