Explorer Homes in on Past-Producing Gold Project in Nevada


Nevada, a major center of gold mining, is the home of 23 mines producing about 5.5 million ounces of gold annually. Getchell Gold Corp. (GTCH:CSE) holds four projects in the state.

The company's flagship is Fondaway Canyon, which Getchell acquired in January from Canarc Resources Corp., together with the Dixie Comstock project, in a US$4 million cash and stock deal staged over four years. Canarc maintains a 2% net smelter returns royalty, of which 1% can be purchased for US$1 million.

Fondaway Canyon is the site of past production and the holder of a historical, 2017 technical report commissioned by Canarc that estimated a resource of 409,000 Indicated ounces of gold at 6.18 grams per ton (g/t) and 660,000 Inferred ounces of gold. 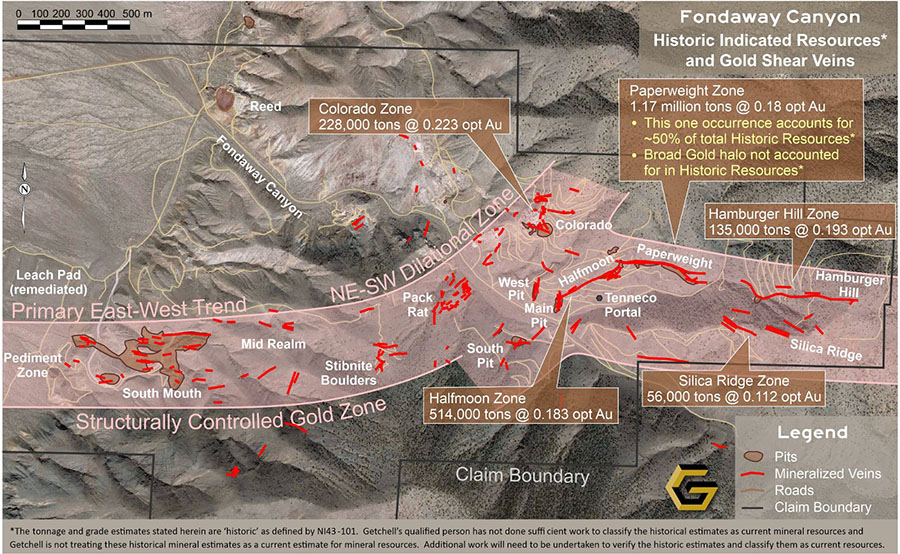 "In combination, that's quite a significant foundation to not only work from but also to build a company around," Getchell President Mike Sieb told Streetwise Reports. "And it's only part of the story. There is a very extensive mineralizing system; even with 40 odd years of work on the project, there are still significant open areas down dip and along strike that have yet to be explored that our geological model anticipates should have mineralization. So we're relatively confident that as we progress here, over our current drill program, as well as next year, we're going to be finding more mineralization."

Sieb further explained that the bulk of the historical work that had been done on Fondaway Canyon has primarily been surficial. "It's been looking at the top 100–150 feet of mineralization. The gold that we've mapped out so far extends for about 3.5 kilometers. It's about 800 meters wide in places. If we go from the mineralization at the highest elevation that we know, down to the lowest drill hole intercept that we know, that's a 600-meter vertical extent of known mineralization. That's not a small block when you start adding it up. And everything that we see indicates that this is a major mineralizing system that should still have significant roots to it."

Sieb gave the example of two holes drilled in 2002, "drilled out west on the Pediment Zone, past the last outcrop, and these two holes, along trend, both hit 20 to 30 meter intercepts of mineralization in a completely different block of rock in limestone. So it's almost like everywhere you drill, there's gold."

When Getchell acquired the Fondaway Canyon asset, it came with a dataset encompassing exploration, some 735 drill holes, surface sampling, small scale mining and underground bulk sampling, over a 40-year span. "We were actually quite fortunate that we weren't being pressured to immediately launch a drill program. Because it was at the outset of COVID-19, all the operations were put on hiatus. That was actually quite a benefit to us, because it gave us the breathing room to absorb all the information, take a look at what everybody had done, what everybody thought about in the past, and put together a new geological model," Sieb noted.

"We've identified gold control features that have not really been put together before. We've analyzed it, and we've come up with a new geological model," Sieb said. "The purpose of this initial drill program is to prove up our geological model."

The company began a 2,000-meter, six-hole drill program in September that is wrapping up now.

"We are conducting a very strategically designed drill program that is trying to dot the i's and cross the t's all at once," Sieb said. "We're looking to prove up the historically defined mineralization and extend it. We're trying to do everything at once, and it is completely amenable to it. Even though it's only a six-hole drill program, it's going to produce more value to us than what you would expect from six holes."

Getchell plans to launch a larger drill program on Fondaway Canyon next year "to start to fill in the gaps to fully prove up the historical mineralization. And then with even more confidence at that point, model a new resource and then eventually work toward a preliminary economic assessment," Sieb stated. 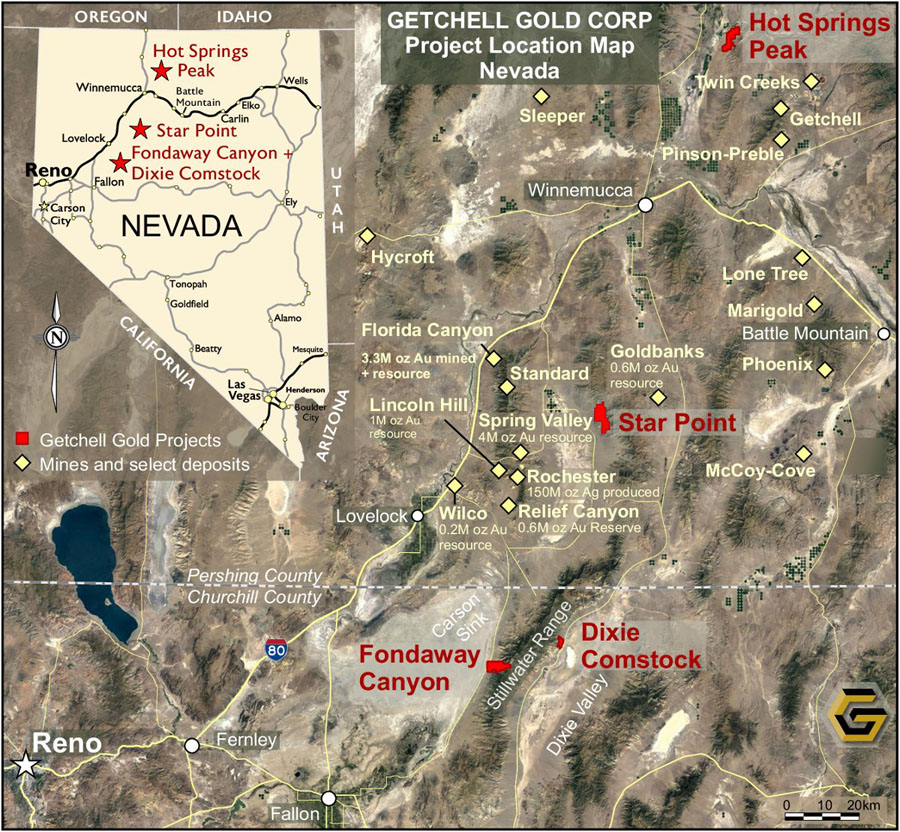 "Star Point, an early stage exploration project, has quite compelling telltale signs that there's something significant there," Sieb said. "It's complementary to Fondaway Canyon, which is primarily a gold project with some silver. Star Point is primarily copper with significant gold and silver. We're modeling that as a copper porphyry target. It's quite high grade on surface; artisanal mining followed the high grade and basically high graded it in the past. However, there's never been any drill program that has tested the roots of the mineralization that we see at surface. We've recently completed an induced polarization survey that is refining the identified geophysical targets in preparation for a drill program next year."

However, "the drill program that we anticipate for Fondaway Canyon next year is going to be a magnitude larger in scope and scale than what we would be doing on our other projects," Sieb said.

Dixie Comstock, situated 17 km northeast of Fondaway Canyon, was a producing mine from 1938 until 1970, with all production in the top 100 feet from the surface. A 1991 historical resource estimate calculated 146,000 ounces of gold grading 1.06 g/t.

Hot Springs Peak is northeast of Winnemucca and saw a small drill program in 2018.

Getchell has caught the attention of a number of industry observers. Red Cloud Securities analyst Taylor Combaluzier covers Getchell. In an October 19 initiation report, the analyst wrote, "In our view, Getchell has a key advantage when compared to other exploration peers with an existing historical mineral resource estimate at its Fondaway Canyon project. Having compiled and analyzed the historical data, the company is aiming to rapidly modernize that estimate and potentially grow the resource with a new understanding of the deposit geology and a targeted drill program currently underway. We believe it is likely that by using this new interpretation the company could eventually define a ~2M oz Au deposit at Fondaway Canyon. Ongoing drill results and resource growth are key catalysts to re-rating the stock. Three earlier stage assets could provide future exploration upside." Red Cloud has a Buy rating and a CA$1.00 per share target price on Getchell.

Sector expert Michael Ballanger wrote on September 14, "The big news on the week was Getchell Gold Corp.'s (GTCH:CSE) announcement that drilling at Fondaway Canyon in Nevada has commenced and that it plans a systematic approach designed to confirm and augment the 1,069,000 ounce resource while getting important clues to further validate the model that resulted from the massive amount of data assessed and compartmentalized for the first time ever. It is a pretty exciting story especially for a gold developer trading at under US$30 per ounce of in-the-ground resource."

5) From time to time, Streetwise Reports LLC and its directors, officers, employees or members of their families, as well as persons interviewed for articles and interviews on the site, may have a long or short position in securities mentioned. Directors, officers, employees or members of their immediate families are prohibited from making purchases and/or sales of those securities in the open market or otherwise from the time of the decision to publish an article until three business days after the publication of the article. The foregoing prohibition does not apply to articles that in substance only restate previously published company releases. As of the date of this article, officers and/or employees of Streetwise Reports LLC (including members of their household) own securities of Getchell Gold, a company mentioned in this article.

Ahead of the Herd: