On the Brink of Legalization in California, Cannabis Company Stocks Should Soar

December 20, 2017 (Investorideas.com Newswire) Technical analyst Clive Maund provides an argument for why two cannabis companies are poised for big gains following the legalization of recreational marijuana in the state of California.


We are on course to see 25–30% growth in the cannabis/marijuana industry per year for the next four years in the United States, at least. That will make it the fastest growing industry in the world, which will mean big profits for the best positioned companies.

This whole process of cannabis/marijuana becoming mainstream began back in 2014-2015, in the state of Colorado, which broke the ice by becoming the first state to legalize recreational use. This caused an initial dramatic spike in stock prices, many of which later lost their gains.

We saw another spike last year, ahead of the votes in favor of legalization in many states, which was followed by prices of most stocks drifting back again on profit-taking and easing of interest. Now, with California set to legalize cannabis/marijuana in the New Year, and Canada set to follow soon after, the door has effectively been broken down, and the industry has a big green light. Remaining Federal obstruction in the U.S. is likely to be swept away by practical considerations, like the tax revenue to be garnered from the industry, and popular opinion. In many ways this is similar to the end of the Prohibition era (of alcohol), which of course led to huge profits for the liquor industry.

It is very important for investors/speculators to rid themselves of any notion they might have that there is something seedy or unsavory about this industry. While it is true that "potheads" give marijuana a bad name by sitting around getting stoned and being generally useless, this is little different than the abuse of alcohol by teenagers and some undisciplined adults. Marijuana itself is simply an herb with an outstanding range of beneficial medicinal qualities and, in fact, it is seniors who are playing a large part in driving this market forward with their demand for cannabis-based medicines and treatments.

One major concern for the future profits of companies in the industry is that once cannabis/marijuana become fully legalized, loads of entrepreneurs will try to cash in by renting greenhouses and warehouses, etc., and stuffing them full of thousands of plants, and as a result drive prices down. This is true: This is what will happen, but only to the prices of raw product. It will not happen to the prices of the finished products made by cannabis biotech companies, which take, in some cases, years of dedicated research to create. Furthermore, it takes years to get a proper business like this set up, but the established leaders in the field have got it all sorted out and have a network of contacts, etc.—not least with politicians. They are not going to be elbowed aside by an army of get-rich-quick merchants.

What all this means is that the established companies in the field, who after years of work have created distinct products and/or services—like supplies of growing equipment such as specialist lighting—are set to make a fortune. Their stock prices should soar, as this industry is still in its infancy with years of rapid growth ahead of it. This is the complete opposite of something like Bitcoin, which is now only going up because of the "greater fool" theory, where the only reason for buying is the expectation that some bigger idiot will show up later and take it off your hands at an even higher price. Bitcoin will crash and burn very soon.

The reason for writing this article now is that we stand on the threshold of legalization in California, which is a massive market. To put things in perspective, its economy is eight times bigger than that of Colorado. We are talking about a huge surge in demand, and therefore in sales and profits for the companies in position to meet that demand. And let's not forget the soaring demand for cannabis-based medicines by seniors and, in fact, that entire population from one end of the country to the other. This being the case we should be able to see early signs of an emerging major bull market across the core stocks in the industry. We can see that happening in the case of the two examples below, one of which has already started moving big time, and the other about to.

We are believed to be on the verge of an exceptionally powerful rally across the sector, and a stock that provides a perfect example of what we can expect to see is General Cannabis Corp. (CANN:OTCQB), which tends to be in the vanguard of such rallies (i.e., it tends to front-run most other stocks). On its 2-year chart we can see how it ran up steeply late in 2016 on excitement ahead of the vote on legalization that took place in eight states on the same day as the general election, November 8. It was a case of "sell on the news," and speculators cashed in ahead of the vote (us included). Then the price drifted lower and lower on persistent light selling and lack of interest, until the price hit bottom early in June, with a slightly lower low late in October, to complete a fine double bottom. 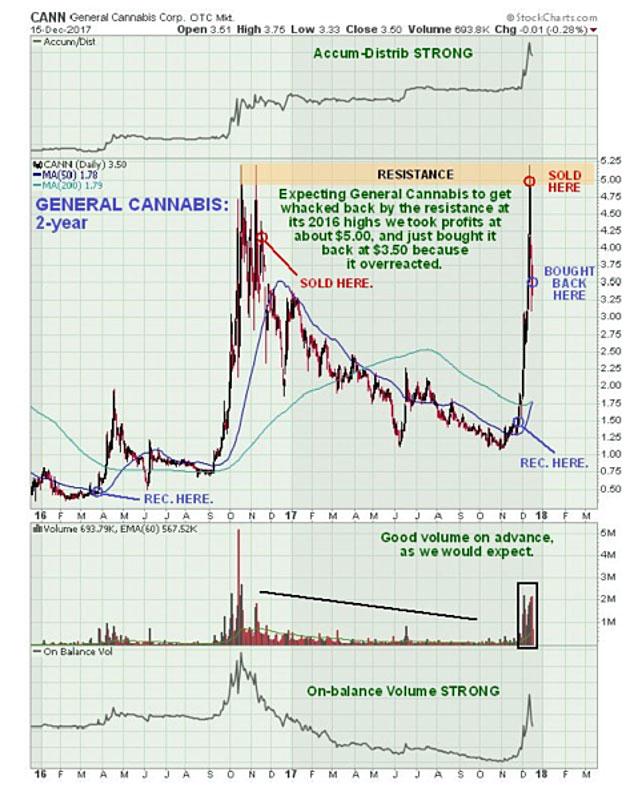 At the time we bought it again, soon after this low, it was pointed out in a general roundup that once the price broke back above its 200-day moving average it would soar, because momentum traders, seeing this, would pile into the stock. This is indeed what happened, and we cashed out at $5 per share when the stock hit resistance in an overbought state at its 2016 highs. On Friday we bought it back again, after an over-severe reaction, because in the favorable environment we are entering, General Cannabis is expected to break above its 2016 highs and head much higher still. The reason for talking about General Cannabis at some length here is that it is a template for what is going to happen soon to many other cannabis stocks—which, as we will see, are limbering up to make similar rocket moves.

An example of a quality cannabis stock that looks set to emulate General Cannabis is United Cannabis Corp. (CNAB:OTCMKTS). We can see how it too has marked out a double bottom very similar to the one that formed in General Cannabis, with the first low late in June, followed by the second one early in November. It too has advanced through its 200-day moving average, and is at the point of blast off, just beneath a line of resistance at about $1.20-1.25 per share, and should "burn rubber" once it gets above this level. We went for United Cannabis on the site on November 25, and are already up 46%. Watch what happens when this breaks above the resistance. 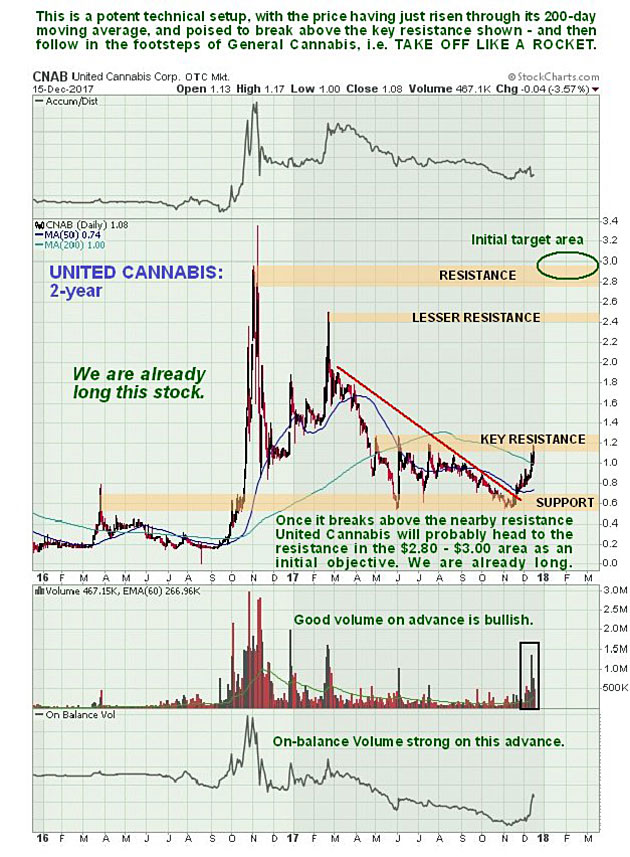 Clive Maund has been president of www.clivemaund.com, a successful resource sector website, since its inception in 2003. He has 30 years' experience in technical analysis and has worked for banks, commodity brokers and stockbrokers in the City of London. He holds a Diploma in Technical Analysis from the UK Society of Technical Analysts.

2) The following companies mentioned in this article are sponsors of Streetwise Reports: None. Streetwise Reports does not accept stock in exchange for its services. Click here for important disclosures about sponsor fees. The information provided above is for informational purposes only and is not a recommendation to buy or sell any security.

5) From time to time, Streetwise Reports LLC and its directors, officers, employees or members of their families, as well as persons interviewed for articles and interviews on the site, may have a long or short position in securities mentioned. Directors, officers, employees or members of their immediate families are prohibited from making purchases and/or sales of those securities in the open market or otherwise from the time of the interview or the decision to write an article, until one week after the publication of the interview or article. As of the date of this article, officers and/or employees of Streetwise Reports LLC (including members of their household) own securities of United Cannabis Corp., a company mentioned in this article.

Charts provided by the author.

The above represents the opinion and analysis of Mr Maund, based on data available to him, at the time of writing. Mr. Maund's opinions are his own, and are not a recommendation or an offer to buy or sell securities. Mr. Maund is an independent analyst who receives no compensation of any kind from any groups, individuals or corporations mentioned in his reports. As trading and investing in any financial markets may involve serious risk of loss, Mr. Maund recommends that you consult with a qualified investment advisor, one licensed by appropriate regulatory agencies in your legal jurisdiction and do your own due diligence and research when making any kind of a transaction with financial ramifications. Although a qualified and experienced stockmarket analyst, Clive Maund is not a Registered Securities Advisor. Therefore Mr. Maund's opinions on the market and stocks can only be construed as a solicitation to buy and sell securities when they are subject to the prior approval and endorsement of a Registered Securities Advisor operating in accordance with the appropriate regulations in your area of jurisdiction.